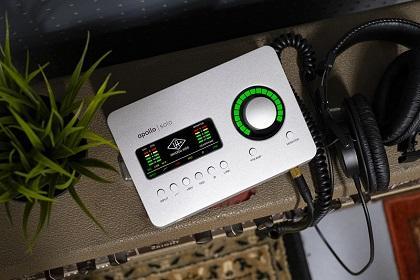 Universal Audio has just announced the launch of the Apollo Solo and Apollo Solo USB. These two new interfaces take the road-friendly form factor of the Arrow interface and allow Mac and Windows users the ability to achieve high-quality recordings and mixes from anywhere.

The Universal Audio Apollo Solo and Solo USB are both 2x6 recording interfaces that feature 24-bit/192 kHz audio conversion, a headphone amplifier, a Hi-Z instrument input, and two Unison-enabled mic pres. For those unindoctrinated, Universal Audio Unison technology adjusts the impedance of the preamp to match the hardware emulated in UAD plug-in form. This allows you to match the sweet spots and circuit behaviors of classic analog gear.

There are two added benefits that Apollo Solo owners can take advantage of that Apollo Solo USB owners won't be able to. The Apollo Solo is a bus-powered interface, which means no power source is needed, just your computer. In addition, the Thunderbolt connectivity of the Apollo Solo means users can access the wonderful world of Universal Audio's LUNA Recording System. LUNA is a free recording application for Mac that allows users to track and mix via an incredibly intuitive workflow with unlimited tracks, integrated multitrack tape machines, and unique virtual instruments.

To learn more about the Universal Audio Apollo Solo and Apollo Solo USB, we caught up with UA Senior Product Manager Gannon Kashiwa to talk about what's going on with these new interfaces.