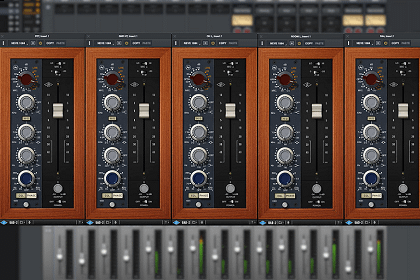 We're past the halfway point of the year, and while it feels like we've lived a lifetime in the last eight months, many of us are lucky to still be working in the studio pursuing our craft. Fortunately for us, plug-in manufacturers have given us some new toys to make our jobs even easier.

And while we still have four months left in 2020, we wanted to shine a spotlight on some of the plug-ins that have inspired us to create new sounds, shape tones, and make records in different ways. Let’s take a look at some of the hottest plug-ins of the year so far.

Needing little introduction, Universal Audio's UAD platform is known for its immersive library of plug-ins that sound and function like the real analog gear they’re based on. New for 2020 is the Neve 1084, a piece of gear that recording engineers everywhere are familiar with and love. The 1084 is essentially the same preamp section from the legendary 1073, but features an upgraded EQ section. Now Apollo interface users can track with the Neve 1084 via Universal Audio's Unison preamp technology, or mix with its iconic tone.

For years, Izotope users have loved the sounds that plug-ins like Stutter Edit and Trash have imparted on their tracks. The plug-in has received an upgrade in 2020 with the aptly titled Stutter Edit 2. With all-new effects modules, more banks, and the addition of an “Auto” mode, it’s safe to say that this is more than just an update to a plug-in.

The new version features 11 effects in total with tons of new options for users, including the Time Variant Modifiers that are enabled on all effects. Between the new presets, gestures, and easy interfacing of the original plug-in, those who want to slice, repeat, and create rhythms will find Stutter Edit 2 to be incredibly useful and inspiring.

Who isn't a fan of Bob Clearmountain? He's the legendary mix engineer behind countless classic albums from David Bowie, The Rolling Stones, Bruce Springsteen, and so many more. For the new Clearmountain's Domain plug-in, Bob teamed up with the great minds over at Apogee to bring his personal FX chain to the digital realm. Whether you'd like to tinker with Bob's tools or utilize his brilliant presets, Clearmountain's Domain gives you access to pre delay/reverb de-esser, pre delay/reverb EQ, stereo delay with spin time compensation, delay blur (saturation), and stereo unison to octave pitch-shift. You'll also be able to take advantage of custom impulse responses for some of Bob's favorite rooms and chambers for classic reverb sounds.

When Steven Slate delivers a new plug-in, you can always expect big things. Such is the case with Slate Digital's release from earlier in 2020, the Infinity EQ. As Slate's "most advanced modern equalizer," the plug-in offers up zero-latency analog matched curves with unique filtering and M/S options and a number of pre-sets that are custom made for the genre of your choice. Created to let you EQ with as few amount of clicks as possible, you can group bands and take control of stereo imaging with the greatest of ease.

Coming from the Eventide H9 Plug-In Series, the ShimmerVerb brings you the lush, ethereal reverb sounds that have made the brand famous for decades. With pitch shifters, delays, and Freeze controls, the ShimmerVerb allows you to craft reverb tails that harmonize and add dreamy ambience to any source. It's easy to fine-tune feedback swells with the built-in crossover controls and infinite feedback option. Whether you’re looking to add otherworldly texture to guitars or lustrous polish to vocals, the ShimmerVerb will add depth and beauty to your tracks immediately, and that makes it one of the best new software offerings of 2020.

Paying homage to the iconic Roland RE-201 Space Echo, the T-Racks Space Delay offers warm, vintage-sounding delays that harken back to the days of tape. With the same great controls that the original unit offered, users can dial in the perfect amount of feedback, reverb, and filtering with the Space Delay plug-in. For more vintage sounding echoes, the Tape Age and Noise controls easily allow you to set the perfect lo-fi tone for your delay. The plug-in offers 12 operating modes and brings you the tone of classic echoes heard on thousands of hit songs.

Do your tracks warrant a much-needed kick in the ass? FabFilter Saturn 2 will get you there! This dramatically redesigned plug-in now features 12 new distortions for a total of 28 styles of saturation. Engineers will now have access to up to six separate processing bands, in addition to a powerful modulation system, regular stereo and mid/side processing, and so much more.

So hot and so new that it's not even officially out yet. The modern hardware giants at Empirical Labs have been control room favorites for years with gear like the Distressor EL8, EL7 Fatso, and Lil FrEQ. After teasing it for some time, Empirical Labs is about to bring us its second plug-in offering, the Big FrEQ.

The Big FrEQ is essentially a hyper-accurate plug-in recreation of the Lil FrEQ rack unit with several added features. Users get six bands of parametric EQ with several other fun add-ons like the SOLO button. This allows you to listen to the exact frequencies being shaped in each band of the EQ.

Also new for the Big FrEQ, Empirical Labs has added the FINISHER section, which polishes sounds with tape-like saturation for a smooth analog sound. Users of the classic Empirical Labs hardware pieces will immediately recognize the tone imparted by this plug-in.

If you have questions about any of these plug-ins or want to purchase some software, we're here to help! Please contact a Vintage King Audio Consultant via email or by phone at 866.644.0160.
Products in this Article
Categories: Product News
Tags: featured, Universal Audio, Plug-Ins, Software, Apogee, Slate Digital, Empirical Labs, FabFilter, IK Multimedia, Eventide & Stutter Edit 2
Posted By: Nathan Doyle