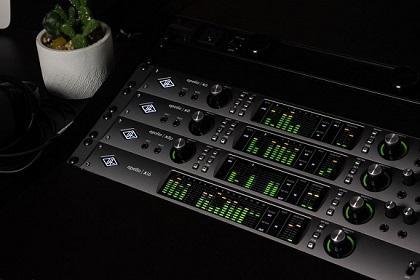 Universal Audio has always been known for its innovation. From legendary mic pres and compressors to game-changing audio interfaces and software, the brand has truly helped shape the landscape of the modern recording industry.

With the announcement of the new Apollo Solo and Apollo Solo USB, many potential interface owners may be asking themselves, "What's the right Universal Audio Apollo for me?" Throughout this Buyer's Guide, we will break down what makes each Apollo interface unique and offer some insight into how they will fit into your workflow.

The flagship of the Apollo line, the Apollo x16 is a 16x18 rackmount audio interface that features lots of connectivity, premium conversion, and unparalleled onboard processing power. A must-have for professional recording studios, the x16 will deliver up to 24 bit/192 kHz resolution via its high-speed Thunderbolt 3 connection.

With DB25 connection points on the back, the Apollo x16 offers 16 channels of analog to digital conversion and can support up to 16 line outputs for all of your routing needs. Connect outboard gear, route alternate monitors, bus channels, and more with the output functionality offered on the x16.

As always, Universal Audio gives studios the ability to expand on their rigs for more processing power, inputs, and outputs. Apollo interface owners can connect up to four UAD-2 devices, including UAD-2 PCIe cards, Thunderbolt-equipped Satellites and other Apollo audio interfaces for expansive functionality in studios of any size.

Another added bonus of purchasing an Apollo interface with Thunderbolt connectivity is that you will be able to use it with Universal Audio's new LUNA Recording System. This new recording production system goes beyond the boundaries of a typical DAW with impressive interface/software integration, software-based instruments, built-in summing mixers, and so much more.

All Universal Audio Apollo interfaces come with the Realtime Analog Classics Plus bundle of plugins, giving you access to the award-winning plugin emulations of some of the most sought after outboard pieces. This package includes the Fairchild 670, Ampeg SVT-VR, 1176LN, Pultec EQP-1A, and many more.

For those looking to take advantage of Universal Audio's innovative mic pre/software technology, the x8p is where it's at. The 16x22 interface features eight built-in Unison preamps, which on their own have a brilliantly clean sound. However, when you pair them with any Unison-enabled plug-in, the impedance of the preamp is set to match the hardware being emulated in software form. This allows you to match the sweet spots and circuit behaviors of gear like the V76, Neve 1073, and UA 610.

Whether you're a budding engineer, working in a project space, or have a top-notch recording studio, the Apollo x8p will deliver impeccable A/D and D/A conversion, powerful on-board processing, and access to Unison technology. Let's not forget, just like the Apollo x16, you'll get instant access to the wonderful world of the LUNA Recording System and the plug-ins of the Realtime Analog Classics Plus bundle.

Project studios and expanding recording operations have found the eight-channel Universal Audio Apollo x8 to be a great solution for their needs. It features the same fantastic conversion of the rest of the Apollo X line and HEXA Core processing in a 1U rack space interface with Thunderbolt connectivity. So how is the x8 different from the x8p? Let's discuss.

This 18x24 interface features four built-in Unison preamps, which allow you to start recording immediately, or use the inputs for line level conversion and connect up to eight of your favorite mic preamps. With up to eight line outputs, a set of monitor outputs, and the ability to cascade with other Apollo units, the x8 has plenty of tools for working in the studio. It doesn’t hurt that the x8 sounds excellent, right out of the box.

The same great technology that makes up the aforementioned Apollo X rackmount interfaces can be found in the Universal Audio Apollo x6. Just like the x8 and x8p, you get eight channels of the crystal clear conversion, but the x6 stands out as it features two Unison mic preamps, leaving the other six channels open for connection with your mic preamp collection. For those looking for an eight-channel arrangement of conversion, but have their own outboard gear to bring to the table, the x6 is the solution. Fear not though, the two on-board Unison preamps are fantastic, whether you use them with preamp emulations or run them fully clean.

While all of the Apollo X interfaces feature Thunderbolt connectivity, the Universal Audio Apollo Firewire is meant for use with FireWire-equipped Mac and Windows systems. This 18x24 audio interface features two FireWire 800 Ports for daisy-chaining with other FireWire devices. In terms of on-board goodies, the Apollo Firewire has four Unison mic pres, built-in QUAD Core processing (four SHARC DSP chips), and quality A/D and D/A converters.

Intended for music makers creating in tight spaces, working on-the-go, and new engineers just getting started, Universal Audio makes several interfaces in a convenient desktop size. Let's start with the Apollo x4, a fan favorite since the interface made its debut last year.

The Apollo x4 features four channels of Unison-enabled preamps, QUAD Core processing, and improved conversion from the previous generation of Apollo desktop interfaces. As for the new convertor particulars, this interface and the Apollo Twin X has a 127 dB dynamic range and -117 dB THD+N.

With the x4, all of the features come packaged in a robust, sleek housing that easily slides into a backpack or suitcase for travel needs. In addition to the aforementioned Unison mic pres, the interface features two easily accessible DI inputs, two headphone outputs, and one knob style monitoring that makes recording and mixing anywhere as simple as possible.

The original Apollo Twin made headlines when it was first released and instantly became a bestseller. It was a simple, intuitive interface that you could take anywhere and know that your results were going to be extremely high quality. We're glad to say that Universal Audio has stayed true to the interface's original concept with the Apollo Twin X.

In a small, roughly 6”x 6” housing, Universal Audio has packed in the same great Unison preamps, conversion, and functionality that made the Apollo series famous. With a built-in DI input, familiar one knob controller, and LED monitoring, the Apollo Twin proves to be an excellent choice for those needing smaller I/O, while still wanting elite level sound quality. Available in QUAD and DUO (two SHARC DSP chips), one of the Apollo Twin Xs will definitely fit your needs in terms of processing power.

If you're in love with the form factor of the Apollo Twin X, but primarily work on a system with USB connectivity, Universal Audio has a solution for you. The Universal Audio Apollo Twin USB is a 2x6 interface that is compatible with Windows-based systems. Much like the Apollo Twin X, the interface features a Hi-Z input and headphone output on the front of the unit, in addition to two Unison-enabled mic pres on the back. The Apollo Twin USB offers 24/192 kHz audio conversion and offers DUO Core processing for plenty of onboard processing power.

The newest addition to the Apollo line, the Apollo Solo is the smallest interface to date from Universal Audio. The compact interface will deliver ultra-high-quality conversion with its 24 bit/192 kHz capability via Thunderbolt 3 connection. Featuring the same preamp architecture found in other Apollo units, the Solo enables you to track up to two channels at a time, either using the pristine tone of the preamps or with the unmistakable sound of classic circuits like Neve and API via Unison modeling technology.

Music makers wanting elite sound quality, access to Universal Audio's plug-in platform, and a more streamlined feature set will find the Apollo Solo to be just right. This interface also includes the Realtime Analog Classics Plus bundle and will fully integrate with the new LUNA Recording System. That means you’ll be able to get to work with great plug-ins and the powerful Accelerated Realtime Monitoring that the LUNA system boasts from anywhere you want.

In addition to the Apollo Solo, Universal Audio has introduced the Apollo Solo USB. As you may have guessed from its name, this interface features USB connectivity while still offering the same great conversion, sound, and clarity of the Thunderbolt version. Now, musicians and engineers working on Windows systems have the ability to take advantage of Universal Audio's onboard DSP, stunning microphone preamps, and plug-ins from anywhere you can connect to a laptop.