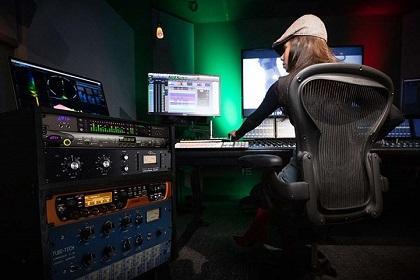 Since its release, Dolby Atmos has exploded in popularity and proven to be the next big thing in post-production. But making the switch to Atmos can be intimidating, especially when it comes to buying the right equipment and setting up a certifiable Atmos mix room. Thankfully, the new Avid MTRX Studio makes it easier than ever to incorporate Dolby Atmos into your studio setup.

Throughout this blog, you’ll learn everything you need to know about setting up a Dolby Atmos mix room using the new Avid MTRX. To get the details, we spoke with Vintage King’s Dolby Atmos expert, James Good. James has more than 15 years of experience in pro audio and has helped build, design, and maintain some of the best studios around the world. James helped us break down each component

At the core of every mixing rig is a powerful CPU, but just how powerful of a computer do you need to mix in Dolby Atmos? Since Dolby Atmos is a DSP-based system, it doesn’t require much additional processing power from your computer. As long as your computer can support your session, you shouldn’t have a problem upgrading to Dolby Atmos.

If you’re starting from scratch, you don’t have to splurge on a new Mac Pro, an upgraded iMac or Mac Mini will do the trick. Depending on the model, you can even use a MacBook Pro to reliably mix in Dolby Atmos. We asked James what he recommends, and here’s what he said:

“I would suggest starting with an upgraded Mac Mini (3.2GHz 6-Core i7 w 32GB RAM). This can be combined with a Thunderbolt rack-mount chassis for added PCIe slots. Allowing you to house an Avid HDX card, for example.“

The next piece of equipment you’ll need is the Dolby Rendering and Mastering Unit (RMU), which is a separate Mac or Windows-based system that connects to your recording interface via Dante or MADI.

The Dolby RMU is the center of the Atmos universe, responsible for processing and rendering objects, managing pans, and authoring Dolby Atmos files. It’s also used for the initial room calibration as well as managing speaker configurations. Here’s what James had to say about the RMU:

“Think of the RMU like an Atmos tape machine. It will take your files — usually passed over a digital network like Dante or MADI — from your main machine and render them in your desired deliverable format. While this can be done without a separate machine, Dolby and I recommend using a stand-alone RMU computer.”

In order to interface with the Dolby RMU, you’ll need to install the Dolby Atmos Mastering Suite software on your studio computer, which allows you create, edit, mix, master and render Dolby Atmos content.

"The Dolby Atmos Mastering Suite gives you the ability to meter your session, render in different formats, up-mix or down-mix, and create deliverables in a variety of formats," James states. "It’s the only software you need to master in Dolby Atmos, although there are some third-party plug-ins for working with codecs and streamlining the rendering process.”

While you can technically use any Dante or MADI-enabled interface to communicate with the Dolby RMU, the Avid MTRX Studio is particularly well-suited for Atmos systems for a number of reasons. A dedicated Dante port makes it easy to interface with the Dolby RMU for up to 64 channels of audio.

“Generally, people will use the Dante connection on the MTRX Studio to interface with the RMU, due to the channel count," James says. "A typical RMU accepts 128 channels, which would be a lot of analog cabling. Dante is definitely the way to go. Especially over a single CAT5e cable.”

The MTRX Studio also offers 18 dedicated line outputs, enabling you to create a fully immersive 9.1.6 system—plus a pair of studio monitors for traditional mixing and mastering. It’s worth noting that Dolby only requires a 7.1.4 system for certification.

Perhaps one of the best reasons to use the Avid MTRX Studio for your Dolby Atmos setup is the built-in SPQ processor, which allows you to calibrate your speakers right from within your DAW. The SPQ software gives you the ability to fine-tune each speaker channel, which has traditionally been done via third-party software or hardware.

Two software programs give you control over your monitoring and routing profiles. The routing software also includes the SPQ function, which allows you to adjust crossover points, EQs, satellite delays and more.

When it comes to speakers, there are a lot of options for creating an Atmos mix room. Variables like room size and sound, budget, and personal preference can have a big impact on which speakers are best for you. Here are James' recommendations:

“There are a number of different speakers that would work for this setup. Thankfully, we can provide a solution that works for each individual user. We can set up Atmos systems on a budget that works for you.

Some of the more affordable solutions I would recommend are Adam Audio, JBL, and Genelec. All three make high-quality, easily mountable speakers that are great for mixing in Dolby Atmos.” If you want to learn more about creating a Dolby Atmos certified mix room, we're here to help! Please contact a Vintage King Audio Consultant via email or by phone at 866.644.0160.
Products in this Article
Categories: Post & How To
Tags: Avid, How To, Dolby Atmos, Dolby, Post-Production, Avid MTRX Studio, Dolby Atmos Mix Room & Post
Posted By: Brad Pack