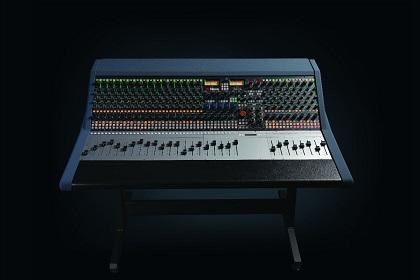 The new Neve 8424 is a hand-built 24-channel analog mixing and recording console that seamlessly integrates with all of the equipment in your studio for a streamlined workflow. This desk is the intuitive and ergonomic link between your analog outboard gear/instruments and your DAW and plug-ins and also offers easy internal recall of all console settings.

Neve's latest console offers dual-channel inputs, enabling you to switch between recording and mixing inputs at the press of a button. With Marinair transformers, two authentic 1073 preamps and classic EQ circuitry, the 8424 delivers the classic 80-series Neve sound in a compact frame. And with two open 500 series slots, you can easily expand your tone with your favorite outboard signal processors.

The 8424 console builds upon Neve's long history of technical innovations and highly revered analog circuit design. Before we get too far in on the new desk in this Buyer's Guide, let’s take a quick look at where it draws some of its inspiration.

Founded by Rupert Neve in 1961, the Neve brand are pioneers of professional audio design and engineering. From the very start, Neve Electronics have utilized Class A designs and high-quality components to deliver unmatched performance.

In 1964, Neve designed and built the world's first commercial transistor-based mixing console for Philips Recording Studio in London. In 1968, Neve produced the famous 2254 Comp/Limiter, followed by the world's first solid-state switching matrix the next year.

Neve introduced the iconic 1073 preamp in 1970, which has been used on countless hit records and is still revered by artists and engineers around the world for its thick, rich tone. The new Neve 8424 console includes two classic 1073 preamps, painstakingly recreated from the original Wessex A88 console designs.

From the V series consoles to the acclaimed 88R, Neve has a long legacy of innovative products and groundbreaking designs. Now Neve continues to push the boundaries of recording technology with the new 8424 console.

An Overview Of The Neve 8424 Console

The 8424 console features a large-format-console-style center section with 16 input channels on the left and 8 on the right. Three line-level input sources on each channel strip make it easy to configure the 8424 to your studio requirements.

The 8424 features classic Neve Marinair® transformers on the Stereo Mix bus, the Stereo Cue bus and the AFL bus for high headroom voltage-controlled mixing. The auxiliary sends, reverb returns, group outputs and PFL bus feature the same virtual earth bus technology as the Neve Genesys and the 88r consoles. With industry-leading sound quality and versatile features, the 8424 is a versatile studio control surface designed to streamline your studio.

Each of the 8424’s channels offers two dedicated inputs, making it easy to switch between recording and mixing projects. Input A is fed by a 25-way D-Type connector on the rear of each fader bank, while Input B is fed by ¼’’ TRS connectors to the rear of each individual channel. Input A can be used to connect your DAW interface outputs to the console for mixing, while Input B can be used for line-level inputs such as preamps or instruments for tracking.

Press the A/B CH IP button to seamlessly switch between Input A and Input B for overdubs or quick mix tweaks. The DIR PRE button routes the channel direct output pre-fader, making it easy to create DAW stem tracks.

Each channel features a +/-20dB rotary encoder trim pot for fine-tuning your gain staging. Press the trim encoder to toggle between trim levels for Input A and Input B, or use the DIR setting to adjust the level of the direct output. Brightly lit eight-segment LED meters on each channel make it easy to visualize your levels and prevent tracks from clipping.

Beneath the preamp section are controls for various sends, starting with a rotary encoder for the Stereo Cue. Use the A/B CH IP button at the top of the channel strip to select Input A or Input B.

Additionally, the Cue can also receive signal from Input C, enabling an additional 24 inputs from your DAW. Press the Cue rotary to turn the send on and off or toggle between pre and post-fader settings.

The blue Pan knob allows you to place signals within the stereo spectrum on the cue bus. Below the Stereo Cue send controls are three mono Aux sends with simple push-button activation.

Just below the Aux Sends are the Insert IN and Insert to Input (I/P C) switches. Press the IN Switch to active the standard 1/4” TRS insert signal path, or press I/P C to assign the channel to Input C and route DAW interface outputs 24-48 to the ST CUE input.

Below the channel pan encoder are the Channel Routing controls, which can be used to route any channel to the main Mix or any of the four Groups. In addition to the channel routing, the cue bus can also be routed to Groups 3 and 4, which can be useful when using the 8424 for In-Line monitoring.

Finally, at the bottom of the channel strip is a high-quality fader for ultra-smooth level control and automation.

At the top of the center section are two large backlit VU meters, along with meter select buttons for the main mix, groups, aux sends, monitor output, cue output and stereo reverb returns. You’ll also find the talkback mic and gain controls up here, although the button to engage the talkback mic is located just below the main monitor level knob for convenience.

To the right of the VU meters are two handcrafted 1073 preamps, produced to the exact specifications of the original modules. With smart routing enabling, you can route the preamp outputs to console channels 17 and 18 with the push of a button—no patching required. Below the 1073 preamps are the instrument DI controls. Inputs for all four units are located conveniently underneath the front of the console.

Below the instrument DI controls, you’ll find the only inch of unused space on the entire desk—two empty 500 module slots. Insert your favorite 500-series modules to expand your tone with limitless possibilities. The two 500 series units can be routed as inserts to the sub-groups, the stereo master bus, or even the input modules above.

Below the VU meters are two dedicated stereo reverb returns which are fed by the XLR inputs on the rear of the console. The reverb returns can be used to return stereo effect unit outputs into the console or as additional stereo line-level inputs.

To the right of the stereo reverb returns you’ll find the engineer headphone volume controls, which are fed to Headphone Output 2. Below the headphone controls are Global Controls, enabling global switching of channel, solo and channel/cue input settings.

To the right of the Global Controls you’ll find the Aux and Cue masters, where you can adjust levels for Aux outputs 1-3 as well as the Cue output.

The group section sits just below the Master Controls. All four mono groups as well as the main mix bus feature two-band shelving EQ for sweetening your sound. The high shelf has a fixed frequency at 10 kHz, while and low shelf is fixed at 220 Hz. Both be boosted or cut by as much as 12dB.

While the four group channels feature a pan knob for stereo placement, the 8424 console features Neve’s proprietary stereo width control function on the Stereo Mix bus for adding width to your mix with the turn of a knob. Each channel also features versatile routing options.

Below the routing controls you’ll find the group solo and cut buttons, as well as five rugged faders for each of the four groups and the mix bus.

The control room monitor selection controls are to the right of the group section. Positioned in the center of the console to allow easy access to the essential controls, the monitor source selection buttons can be found at the top of the control room source section. AFL/PFL solo level control, dim and monitor level knobs are also located here, along with monitor output selectors, CUT, DIM and MONO buttons.

Users can choose to monitor the main mix while recording or mixing; the external stereo input while monitoring any external audio sources; or the 1/8” jack monitor input located underneath the console armrest while listening to reference tracks. Users can also route the output signal to three stereo loudspeaker outputs, making it easy to reference your mixes on multiple playback systems.

Additionally, this portion of the desk features an on-board Recall system which makes pulling up settings for sessions easier than ever. Save and load console switch settings, fader positions, and hard pots from the internal memory of the desk.