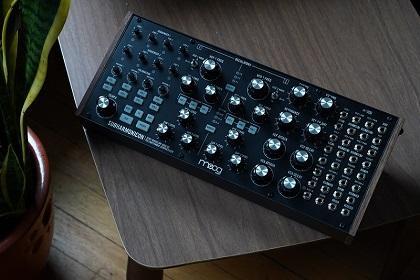 One of the most exciting releases we’ll surely see in 2020 is the Moog Subharmonicon, the brand's latest addition to its semi-modular synthesizer line. Everyone with a Mother-32, DFAM, and three-tier rack can now experience the semi-modular feng shui of this trinity of synths all jamming in harmony (or chaos).

I got to have a first look at the Subharmonicon at the 2018 Moogfest when it was introduced as one of the DIY kit builds. Only 120 were produced for the festival. Ever since, I’ve seen synth heads on muffwiggler and the Moog forums asking when a full production model would be released and we’re elated to report that it’s here and it’s fantastic.

Before we get to far into the history and workflow of the Subharmonicon, let's cover the basics. This is a two VCO synth that features four additional subharmonic oscillators (two per VCO) that can be layered to build massive chords or sent to either of the four-voice sequencers on board. Each VCO features saw, pulse width waveforms, or both combined. Each of the oscillators has a mixer section at the bottom of the panel. To the right we have our filter section and to the right of that our patch bay.

In our new demo, I'll be taking you on a guided tour of the Moog Subharmonicon and showing off what it can do. Additionally, I'll give you a taste of how it can interact with its semi-modular synth brethren, the Mother-32 and DFAM.

Update: After exploring more with the Subharmonicon, Mother-32, and DFAM, I decided to bring the Moog Matriarch into the fold. I threw up my cameras and captured some of the sounds I was able to get with this beautiful family of semi-modular synthesizers.

The History Behind The Moog Subharmonicon

The Subharmonicon was inspired by two classic instruments that date back to the 1930s and 40s. The first being the Trautonium, a touch-sensitive synthesizer with a saw-tooth waveform and subharmonic oscillators.

The second instrument being the Rhythmicon, which was designed by Leon Theremin. This was one of the world's first rhythm machines that focused on multiple harmonically related polyrhythms generators. Much like the Trautonium and Rhythmicon, the Subharmonicon explores sub-harmonic generation that can be sequenced in a number of ways rhythmically and polyrhythmically.

The Workflow of the Moog Subharmonicon

Before doing anything, make sure the Play and EG button at the bottom left are engaged. From there, you’re going to want to decide on both the Sequence Octave range and how you want to quantize your sequence. The manual can deeply explain both but essentially both buttons chose how wide or narrow your pitch range is for your sequences. Lowering to start can make finetuning your note selection much easier.

From there, I would to tune VCO 1 to a key or pitch that I liked, then move over to VCO 2 and tune it’s oscillator to any complimentary interval. I would then move down to tune the sub-harmonic oscillators which in most cases I treat like bass lines. At this point, we should have now 6 notes all droning and harmonizing together. If you wanted, you could stop here, plug in your favorite MIDI controller and trigger the VCOs to play these massive, 6 voice chords. Add a little Attack, Decay, EG AMT and some delay and you’re in business.

If you want to move on, let’s send these different voices through the sequencer. I would start by sending VCO 1 to Sequencer 1. Start turning the mini Stop knobs and dial in a melody to your liking. Do the same process for VCO 2 so that the two sequences are in harmony again.

Moving down to the Polyrhythm section, this allows you to control how both VCO 1 and 2 cycle through each Step in their individual sequences. The Rhythm dials are very finetuned so this will take a little bit of getting used to dialing in exactly what kind of pattern you’re looking to achieve.

The good news is that there are endless possibilities here to swing certain notes here, and have others stagger, intersect and overlap. Some handy patch can help lock the two sequencers to each other or something like the DFAM.

So we tuned our oscillators, we’ve built a rhythmic sequence we’re happy with. The last step is to just play it. As the sequence runs, I would start with something very stacatto, plunky with retro Nat-Geo vibes then raise the Attack, Decay, lower the the Cutoff, and raise the EG Amount to get a more pad-like, washy effect. Definitely experiment with raising and lowering VCO 1 to change the key of your sequence. All the other oscillators will respond to this as well.

Using The Moog Subharmonicon With The Mother-32 And DFAM

As I started shooting this demo, the first thing I had to do was rack it up with the Mother-32 and DFAM and just get everything talking together. I had the Mother-32 multing out a clock to the DFAM and to the Subharmonicon.

I built a sequence on the Mother-32, but as I transposed the key of the sequence, it would also affect the key of Subharmonicon's oscillators and sub-oscillators. Everything was roughly tuned to fifths and octaves just so I had a lot of freedom to jump around while keeping it musically “safe.”

I ran that setup for most of the jams and eventually unpatched the Mother-32 to play as a more standalone, mono lead synth. A lovely surprise was how well the Subharmonicon can be a little beat making machine. Getting a solid techno kick pattern and improvising in the polyrhythm section was incredibly fun. Pairing this as an extra drum voice to accompany the DFAM also seems like a no brainer.

Much like the rest of the line, the Subharmonicon integrates so seamlessly with the DFAM and M32, it’s almost like it’s been there the entire time. Moreover, I feel like I could play an entire set with just the Subharmonicon as a standalone instrument.

From percussive and calculated polyrhythms to slow and droning ambient sounds, the sequencer is where you’ll most likely be spending most of your time. Much like the success of its predecessors in the line, the Subharmonicon is sure to inspire and elevate people's music-making while bringing patching, subharmonics, and polyrhythms to the forefront.