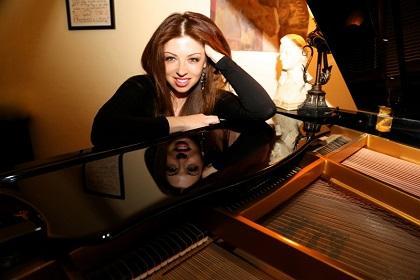 Pinar Toprak is a renowned composer and instrumentalist with a diverse body of work spanning film, television, and video games. Known for her work on sci-fi hits like Marvel Studios’ Captain Marvel, DC Comics’ Stargirl on The CW, and SY-FY’s Superman prequel series Krypton, Pinar is a powerhouse in the superhero circuit.

Born and raised in Istanbul, Turkey, Pinar began her classical music education at the age of five before moving to Chicago to study jazz. She went on to earn a degree in film scoring from Berklee College of Music, and a Master’s Degree in composition at CSUN.

We recently had the pleasure of chatting with Pinar for our Five Sounds With... series. Read on to learn how she captured the iconic sounds of Captain Marvel, Stargirl, and other projects including the extremely popular Fortnite video game.

For Captain Marvel, the main thing was figuring out the thematic ideas for the three main characters. We also had this very distinctive location change, the film starts out on this other planet, Hala. Then we go to more of a 90s blockbuster sound. I wanted to make sure that there was a distinct sonic difference between what happens on Earth and outside of Earth. All of the Hala scenes are very analog synth-driven. I have a Moog One, which you can hear at the end of the film. I’m also a huge fan of U-He plug-ins.

All of the compositions were done in my studio, I have a great team that helps out with programming. I track everything in Cubase through a UAD Thunderbolt Quad Apollo. I use the Slate Digital VMS for analog instruments, which I love.

After the tracks are approved, we send the mockups over for orchestration. They make copies for us, then we go to the studio and record. The recording took place in London, mostly at Abbey Road, which was incredible. We had a 90-piece orchestra. Marvel likes to record everyone at the same time, which is also how I like to work.

There’s a kind of magic that happens when everybody is performing together. Obviously mix-wise there are certain advantages to recording everything separately, but Allan Myers recorded and mixed the score so I knew we were in great hands. With all of those fantastic musicians at Abbey Road, you really can’t go wrong. Everything sounds amazing. We had a lot of recording sessions and a lot of pickup days as well.

For the first week, I was there in person. Then I had to come back and continue writing to keep up with picture changes. It was still recorded at Abbey Road, but we monitored the session from Disney here in LA. We set everything up on that first session.

One of the luxuries of working on that show was that we had a live orchestra for all 13 episodes of the show, which is not very common.

Stargirl has a lot of hybrid and synth elements, but at its core, it’s paying homage to Back to the Future. So when the creator Geoff Johns and I sat down to talk about the score, I told him we could do it in the box, but for some genres it makes a huge difference having the score played by a live human. I felt that the score would benefit massively from having real musicians and I’m very grateful he agreed.

That one we recorded in Los Angeles at Capitol Records, which is a wonderful place to do a recording. Due to the limitations of the space, we recorded strings and brass separately. The woodwinds we actually overdubbed after the initial recording. And for the very last episode, we recorded a 60-piece episode at Warner Bros, and everyone was in the room at the same time.

The whole show, both visually and sonically, is very cinematic, so it was really nice to be able to have the orchestra. It really changed the way I wrote the score, knowing that those cues would be played by an orchestra really influenced my decisions.

The show is about Superman’s home planet, Krypton. Creatively it was really fun because they didn’t have anything set in stone for how that world was going to sound, so I had a lot of creative freedom. We did have some moments where we paid homage to John Williams’ team, which was incredible. But for the most part, I was able to create some really unique sounds.

For example, there were some bar scenes on Krypton. In a regular TV show, you can grab some sort of rock track, but you can’t do that on another planet. So I had to think about what Kryptonians would listen to in a bar. It was really fun to create a whole different kind of vibe for that series. Everything for that series was done in the box. We didn’t have a live orchestra for that one, but we did have some live vocals.

I used an instrument called an aFrame, which is a cool electronic percussion thing. I like to use it for sound design. It’s a really crazy instrument and it actually looks like the outer ring of the Superman sigil. Other than that, most of the tracks were all digital. I used the U-He Zebra and Repro synths a lot. I used some of the Native Instruments stuff, as well as Arturia.

I also have an Access Virus TI2 synth that I’ve always loved because you don’t need an interface. It’s the best combination of an external synth and working in the box. I used that quite a bit.

I look at sound creation technology like a carpenter. I don’t look at it like what sounds can I make with these tools. I look for the tools that I need to make my sounds.

I primarily use a Doepfer LMK2+ keyboard, which is built directly into my desk. I used to have a Kawai MP9500 that I used for so long. I loved that keyboard. It actually has hammers inside, I love the action. It took up a lot of room so I finally let go when I did some remodeling and had a custom keyboard made for me.

Purl was fun because the whole score was big-band. We took a similar process with mocking things up in my studio, but we recorded with an amazing jazz band at Capitol Records. Tommy Zacari engineered that one, who is just wonderful with that sort of sound.

It was really nice to go back to jazz. It’s something that I always loved growing up. You don’t often get a chance to exercise that muscle in the film world. Especially a film that fully embraces full-on big-band jazz. It was one of the most fun experiences I’ve had writing and recording.

I did the first main score for Fortnite with a 60-piece orchestra. We had some hybrid elements as well, but the orchestra was all live and recorded in Nashville. I conducted the session a few years ago, which was a lot of fun. The main difference when working with video games, other than the cinematic, is that we always think in terms of layers and loops. Everything has to be loopable, and able to get bigger or smaller based on gameplay and intensity. You have to write with that in mind, that the track can go in any direction at any time.

If you have any questions about the gear mentioned by Pinar in her interview or want to know more about tools for composing, we're here to help! Please contact a Vintage King Audio Consultant via email or by phone at 866.644.0160.
Categories: Interviews
Tags: featured, Five Sounds With, Film Scores, Captain Marvel, Stargirl, Krypton, Fortnite, Purl, Film Score, Video Game Scores, Pinar Toprak & Women In Audio
Posted By: Brad Pack