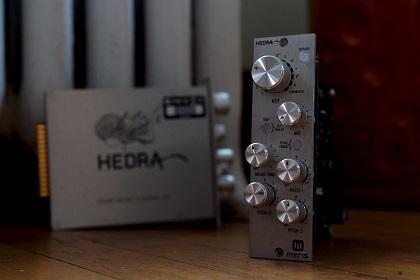 Before Meris began making some of the most cutting edge pedals in the industry, the brand actually got its start with a handful of 500 Series releases. The latest creation from Meris sees them returning to form with the Hedra 500 Series.

For those who are wondering, this is the same 3-voice intelligent pitch shifter that was released in pedal form and made my list of the hottest releases of 2019. The new 500 Series version accels with pro audio grade components and is ideal for both tracking and mixing during your next session.

Watch our new demo video of the Meris Hedra 500 Series below and continue on to learn more about the workflow used for each sound source.

For this demo, I used a stereo pair of Hedra 500 Series that I have connected to one another with a stereo linking cable. This means that whatever parameters I dial in on the left, the Hedra will automatically dial it in on the right Hedra. This makes for a much faster workflow. If you're looking to experiment a bit, it's also really exciting to dial them in separately, especially with a wide stereo spread pitch-shifted delay effect.

In these two examples, I’m playing extremely minimally and letting both Hedra 500 Series do the heavy lifting. Because they’re such rhythmic examples, it made sense for me to track right through them into Logic. I used a signal splitter so I could have a Hedra in both my left and right channels and that is pretty much the theme for this entire demo. A lot of stereo happening.

For the first synth example, I wanted to demonstrate how the Hedra 500 Series can take any mono line and essentially build an entire harmonized ensemble around it. I’m playing in Eb minor, so I dialed in a relative key of Gb major, dialed in some “friendly” 3rds, 5ths and 7ths and just went for it and loved the resulting dark, orchestral sound.

The second synth example is meant to demonstrate yet again what an amazing rhythmic aid the Hedra 500 Series can be. I dialed in a really slow arpeggiator on the Moog Matriarch and then doubled that time on both Hedra 500s and just had a jam with it.

When it came to working on vocals, I created a hardware insert in Logic using the I/O plugin and dialed in the Hedra 500 Series to the key that Jake LeMond was singing in, which was E major. For the main vocal, I dialed in a three-part harmony of a 5th down, 5th up and major 7th up on top of his dry vocal. For the backup vocals, I added a different delay line to each one of those pitches to spread the harmonies into their own independent voices for a more spacey and modern sound.

The drum example was just a quick and dirty way to show a simpler side of the Hedra 500 Series as a simple stereo delay. I used both Hedras on the entire bus. A quarter note in one speaker, a dotted eight in the other, which is a pretty tried and true classic recording trick to give a “breakbeat” feel to your drum track.

Even before tracking any bass, I already knew I wanted a Joy Division-esque chorus effect. I recorded using the DI in, used an effect insert with the I/O plugin, looped the riff and then dialed into both Hedra 500s to get the perfect amount of modulation happening.

The acoustic guitar was miked up with an sE 4400 that ran into a Meris 440 mic pre, which recorded straight into Logic. I then created a hardware insert and used the I/O plugin to send my recorded acoustic through both Hedra 500s. I was looking for a shimmery but subtle stereo delay so dialed in the same setting amount of Micro Tune to about 11 o’clock and then dialed in a quarter and dotted eight delay and panned em hard left and right.