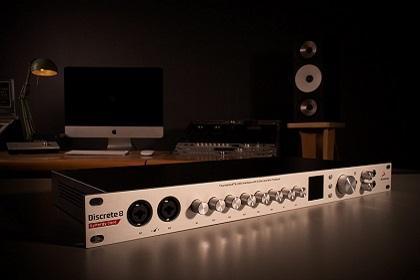 Antelope Audio has just announced a new promo that will net you even more free FX when you purchase a Discrete 4 or Discrete 8 Synergy Core interface. Since both interfaces are packed with more processing power via FPGA and DSP chips, you'll be able to run even more FX during recording and mixing.

From now through April 30th, 2020, you'll receive a free package of classic British mic pre and compressor emulations with your Discrete 4 or Discrete 8 Synergy Core order. These four FX are an added gift, and are in addition to the 36 plug-ins that already come with the Synergy Core interfaces. In total, that means you'll get 41 FX for free with your purchase!

Update: Antelope Audio has announced new vouchers and savings for both current and new Synergy Core and Orion 32+ | Gen 3 interfaces. Here are the new expanded offers:

"Modeled after a ‘gold-standard’ British analog preamp known for its warmth and musicality. Its sonic signature is ubiquitous to the point of needing no further introduction, and it’s borderline impossible to make it sound bad."

"Whatever music you are into, chances are a 4K has been heavily involved into your favorite records. Still in use in major studios today, superseded by modern technology but never bested by it, the British 4K series large-format mixing consoles are iconic studio pieces that rightfully earned their respected place in recording history. The 4K is THE mixing board of 80s rock and synthpop, and perhaps one of the most revered desks ever.

Enthusiastic as we are about great analog sound, bringing the COMP-4K STRIP to the Synergy Core FX platform is a proud moment for us at Antelope. An actual channel strip from a well-preserved desk was dismounted, painstakingly analyzed and its digital recreation rigorously tested for it to rank among the most faithful 4K reproductions out there."

"Grove Hill Liverpool is a contemporary fusion of 1960s’ finest American and British compression technologies. This compressor sounds rich, wide and thick. Run acoustic guitars through it and you’ll hear them as clear as possible, yet with a more full-bodied sound and soul.

A great mid-range healer, Liverpool will add a desirable smoothness to guitar leads, synths and vocals. When applied to bass it will achieve a big and warm sound. Push it harder and you’ll add an edge without affecting clarity. Liverpool is an amazing tool that’s quite unlike other compressors! See for yourself."

"A variation on the VEQ-4k Brown, which’s still a huge thing in Japan. Very close as sound to a Pultec EQ and with controls simulating valve EQ curves. This one is not just one more module strip revision, but a hardware rarity with a sound of its own."