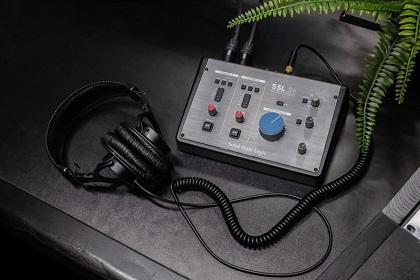 Days before the start of the 2020 NAMM Show, Solid State Logic rocked the pro audio world with the announcement of two new interfaces. Just like the best selling SiX desktop mixer, the SSL2 and SSL2+ interfaces have brought the brand's technology down to a more affordable range for a whole new generation of audio creators.

The all-new SSL2 and SSL2+ are USB audio interfaces that draw from over four decades of SSL innovation. Each interface features two impressive analog mic pres, in addition to 24-bit / 192 kHz converters, and a "Legacy 4K" mode. The newly designed "Legacy 4K" mode is based on the SL4000 series console and adds classic analog color and character to your recordings for a dash of extra vintage vibe.

We recently got hands-on with the new SSL2+ and used the interface to create a hip-hop track in the Vintage King video studio. Watch below to learn more about the interface and hear how it faired during our session, which features performances by MotorKam (vocals), Bryan Reilly (drum machine, live drums, bass), and Dustin McLaughlin (electric guitar, synthesizer).