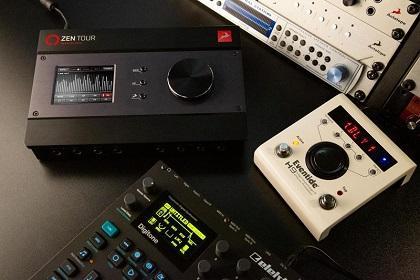 At the 2020 NAMM Show, Antelope Audio came ready to impress with a redesigned version of its classic desktop audio interface, Zen Tour. As its name suggest, the newly minted Zen Tour Synergy Core has been given the same upgrade that other Antelope interfaces have recently received with more processing power than ever before.

The new USB/Thunderbolt 3 interface is now available for pre-order through Vintage King and to make things even better, Antelope is throwing in five additional FX of your choice for free with any pre-order. The Zen Tour Synergy Core already comes packed with 36 Synergy Core FX, but you'll get to choose five additional FX from Antelope's vast catalog of preamps, EQs, compressors, and much more. That's 41 FX for free when you pre-order by April 30th, 2020!

Antelope's library of FX is just the start of what the Zen Tour Synergy Core will bring to your studio. The new Zen Tour features four instrument/line inputs, four mic/line ins, eight line outs, two monitor outs, two headphone outs, and two re-amp outs, for a total of eight analog inputs and 14 outputs. In addition to this analog I/O, the interface can expand over ADAT and SPDIF for an additional 10 digital input and 10 output channels.

Update: Antelope Audio has announced new vouchers and savings for both current and new Synergy Core and Orion 32+ | Gen 3 interfaces. Here are the new expanded offers:

Watch below to learn more about the Antelope Audio Zen Tour Synergy Core and pre-order the interface here to get your five additional FX for free!