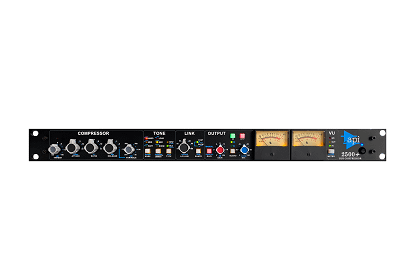 It's rare a modern piece of gear comes along and quickly becomes a modern classic, but API Audio's 2500 stereo bus compressor has done just that. Since its release in 2002, engineers all over the world have relied on the 2500 for its impeccable stereo image, punchy bottom end, and signature warmth.

Today, API Audio has announced they are upgrading this essential stereo bus compressor and adding a number of new features. The API 2500+ will feature an Expanded Threshold control (+20dv to -20dv) and the new Mix/Blend function that was added to the 50th Anniversary Edition of the 2500 released last year.

“The 2500+ is an evolution of the 2500, with the addition of a few key features that our users have had on their wish lists for quite some time," stated API's Director of Engineering Todd Humora. "We’re very grateful for the ongoing success of the 2500 and it’s our hope that the new 2500+ will allow for even greater creativity among its users in the studio, and in the live market.”

In addition to these new features, the API 2500+ still has the amenities that have made the stereo bus compressor such a beloved piece of gear. The 2500+ features two selectable styles of compression, including "Old" (a feed back style of compression) and "New" (a feed forward style of compression). Also intact is API's patented THRUST circuit for a positively punchy bottom end.