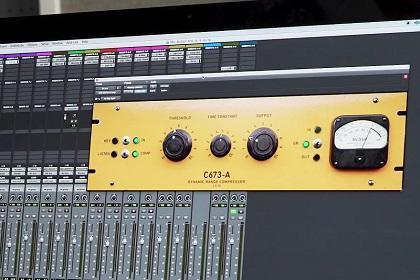 Just over a year ago at the 2019 NAMM Show, plug-in purveyors McDSP announced they would be releasing a new 19-inch rackmount processing box. Dubbed the APB-16, McDSP's innovation gives users digital control via plug-ins over analog processing that is actually happening inside the physical unit itself.

Integrating the McDSP APB-16 into your rig is as simple as connecting via Thunderbolt to your computer. From there, you can process up to 16 mono (or eight stereo channels), and if that's not enough, you can daisy chain five APB-16s together for a grand total of 80 channels. Working with the processors is extremely easy, as you're able to save pre-sets and recall session settings in mere seconds.

There are currently six processors that come with the APB-16, although McDSP has its eyes on expansion. The current crop of processors available to users includes a number of compressors, limiters, and transient enhancers.

McDSP Moo Tube: A compressor with a soft touch that will add warmth to tracks.

McDSP El Moo: An all-analog limiter based on Moo Tube with an adjustable analog saturation stage.

McDSP Chickenhead: Similar to an Altec 436, this will be great for punchy and aggressive compression.

McDSP L-18: As the second limiter included with the APB-16, the L-18 is meant for clean and pristine compression.

McDSP C-18: Similar in concept to the L-18, the C-18 is meant for extremely clean compression. This processor is actually based on McDSP's first plug-in, the CompressorBank, and features an all-analog version of the brand's BITE control.

Watch our demo below to hear a track constructed with the McDSP APB-16. Each of the six processors is used throughout the video on performances from Jake LeMond (guitar, vocals) and Bryan Reilly (bass, drums).

If you would like to purchase the McDSP APB-16 or have questions about the processing box, we're here to help! Please contact a Vintage King Audio Consultant via email or by phone at 866.644.0160.
Categories: Videos
Tags: featured, Compressors, Limiters, Analog, McDSP, McDSP APB-16, APB-16, Signal Processing & Digital
Posted By: Eric Allen