The Future Of Patch Bays With The Flock Audio Patch 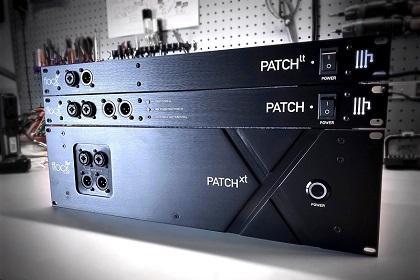 Some audio engineers swear by the sound of analog circuitry. Others can’t live without the lightning-fast workflow of their favorite DAW. As hybrid studios continue to rise in popularity, more and more engineers are looking for ways to seamlessly integrate their favorite analog signal processors into the digital domain.

That’s exactly where Darren Nakonechny found himself before he decided to build his own solution. The PATCH System from Flock Audio is an all-analog audio patch bay routing system that gives you complete control over analog signal processors via an intuitive software interface.

We recently sat down with Darren, who is the CEO and Founder of Flock Audio, to discuss how his innovative PATCH System came to be, and how audio engineers all around the world are using it to revolutionize the way they create.

THE PATCH BAY OF THE FUTURE

“I never intended to get into the pro audio manufacturing business originally,” says Darren.

Before founding Flock Audio, Darren ran a successful recording studio. As his studio continued to grow, so did his collection of analog gear. Tired of dealing with the hassle of traditional patch bays, Darren began looking for a better, more flexible means of analog routing with

“I was looking all over online to find a product that would meet my needs and there just wasn’t one,” states Darren. “So I started on this two-and-a-half-year journey of designing the PATCH System with a team of five engineers. There were a lot of bumps along the way, but in the end, I definitely designed and built something far more advanced than I had ever initially intended. And it all started in my home studio basement.”

“The PATCH System was designed to bring analog routing into the 21st century by using digital control without adding D-to-A or A-to-D conversion,” Darren explains. “DAWs and interfaces have improved so much over the years, but patch bays haven’t changed at all. PATCH brings all of these new innovations in pro audio into the world of analog routing.”

The PATCH System is the world’s most advanced digitally controlled analog patch bay system. The system includes a hardware unit for interfacing with your analog equipment and an intuitive software application that lets you instantly patch any signal processor in your studio with the click of a mouse, completely removing the need for patch cables.

The compact 1U hardware unit features 32 inputs and 32 outputs via DB25, as well as two front-panel combo input jacks and two XLR outputs for quickly connecting additional equipment. And with 32 phantom power-equipped channels, you can build your entire signal chain, from the microphone to the mix bus.

The PATCH System app, compatible with Windows and OS X, lets you create, store and recall routings, allowing you to prep sessions in minutes so you can spend more time creating. And with advanced multing capabilities, you can explore complex routing options that you never considered possible before.

“The PATCH System is all about saving time and improving efficiency,” says Darren. “After the initial setup, PATCH allows you to do very complex routing in seconds, which is a big alleviation of a problem that’s always been there. The ability to run microphones directly from the path system is big too because it lets you swap between various preamps. It really adds a new level of efficiency.”

“A lot of creativity is limited when it comes to using analog gear,” Darren states. “Nobody wants to mess with patch cables, so they typically set their signal chain at the patch bay point and never touch it. But what we hear from our customers is that they’re starting to get more creative and explore new signal chains that they never would have considered because they didn’t want to touch their traditional patch bays.”

When designing the PATCH System, one of Darren’s top priorities was to ensure that the system does not alter or color audio signals in any way when controlling analog gear. According to Darren, this was no small feat and required nothing short of rocket science to accomplish.

“We don’t use any relay-based components as far as doing the analog switching,” explainsDarren. “We use a form of air-traffic control analog chips, which have really high bandwidth and really high headroom. It’s incredibly reliable in terms of longevity because it’s designed for air-traffic control so there are a lot of safety precautions.”

“We use four analog crosspoint chips to complete the routings, which allows us to route signals without digitizing the signal so it stays analog all the way through,” continues Darren. “The only digital component or portion of it is simply your computer system contacting the hardware and telling it which way to route the analog signals.”

Although the PATCH System was initially designed for small to mid-size hybrid studios, it has quickly become adopted by larger facilities looking for ways to synchronize equipment across multiple rooms. For larger configurations, multiple PATCH Systems can be chained together for expanded I/O, proving large-scale facilities with nearly limitless possibilities.

“Customers are seeing such different ways of using it that they’re using it in different applications that we never even thought of,” Darren says. “For instance, we have mastering engineers with multiple D-to-A converters, and they’ll use PATCH to print a single-source master through three different converters and allow the client to choose which master they like best. So people are using PATCH in really cool ways to do stuff you never used to be able to do.

THE PATCH IS GETTING RAVE REVIEWS

Despite the PATCH System being relatively new on the market, it’s already been adopted by some of the top audio professionals in the world including Richard Devine, Greg Wurth, Michael Mangini, Luke “Lucas” Pimentel, Justin Blaze, Gen “Genzo” Rubin, Greg Wells and more.

THE PERFECT SIZE FOR ANY STUDIO

PATCH LT offers a 16x16 interface for engineers and producers working in smaller studios. PATCH LT uses the same Patented Matrix Technology and internal components as the flagship PATCH system with zero compromises. Best of all, PATCH LT is expandable with any PATCH System product, so you can easily integrate new gear into your system as your studio grows.

PATCH XT makes it easier than ever to connect every piece of gear in your studio with a staggering 96 inputs and 96 outputs. And with new features like a locking USB connector, CAT5 network support and a built-in power supply, PATCH XT is bigger and better than ever. If you are interested in purchasing the Flock Audio PATCH or would like to pre-order the PATCH LT or PATCH XT, we're here to help! Please contact a Vintage King Audio Consultant via email or by phone at 866.644.0160.
Categories: Interviews & Product News
Tags: featured, Recording Studio, Flock Audio, Flock, Patch & Patch Bay
Posted By: Brad Pack