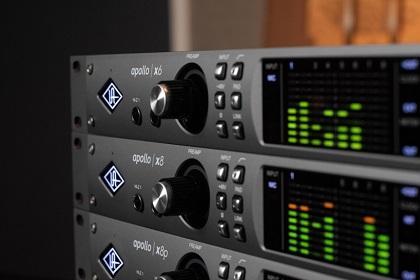 A quality audio interface is the first essential piece of gear for any home studio owner. Whether you’re recording or mixing, every signal passes through the audio interface. Cheap interfaces often make tracks sound weak, thin and brittle. But a quality interface can bring your tracks to life.

In this Buyer’s Guide, you’ll learn everything you need to know about how to select the audio interface for your studio, including info on preamps, converters, DSP and more. But first, let’s take a quick look at how audio interfaces came to be so popular.

THE HISTORY OF AUDIO INTERFACES

In 1992, Creative Labs released the Sound Blaster 16 sound card, enabling musicians to record CD-quality audio directly to their computers for the very first time. It was the beginning of the home studio revolution.

Today, audio interfaces are one of the primary devices used to record and mix music. With great sound, versatile features, and flexible I/O options, audio interfaces have made it easier than ever to create professional productions from almost anywhere.

BASIC COMPONENTS OF AN AUDIO INTERFACE

Microphones convert sound waves into an electrical signal. But without any amplification, those signals are extremely weak. Preamps are used to amplify these signals to a suitable level before recording, hence the name pre-amp.

The oldest preamp models used vacuum tubes to amplify the signals, while designs from the 1960s and 1970s used transistors. Most modern preamp designs use integrated circuits for precise control over the sound. Each type of preamp has a unique sound that colors your recordings.

Another important factor to consider when purchasing a preamp is the type of amplifier design it uses. Most preamps fall into two main categories: Class A and Class A/B.

Class A amplifiers constantly receive power, enabling them to capture a hyper-accurate sonic image. However, the constant stream of power creates a lot of heat, which can wear down the preamp over time. Class A/B amplifiers use less power, but can sometimes create unwanted distortion.

After audio signals are captured by an interface, they need to be converted into a digital format and sent to your computer. That’s where converters come in.

Analog-to-digital (AD) converters transform analog audio signals from a microphone or instrument into a digital signal that can be processed by a computer.

When you press play on your computer, digital audio is sent to your interface, where the digital-to-analog (DA) converters transform the audio into an electrical signal that can be recreated by your studio monitors.

The sampling rate controls how many times an analog audio signal is sampled per second in order to recreate a digital version. The more samples taken, the more detailed the digital image will be, making it sound closer to the original source.

Bit depth controls how much information is captured in each sample, which correlates to dynamic range. The higher the bit depth, the more dynamic range you’ll have to work with when recording and mixing.

Essentially, the higher the sampling rate and bit depth, the higher the quality. All pro Interfaces support the minimum CD standard quality for audio recordings, which is a sample rate of 44.1 kHz/sec and a bit depth of 16 bits. Many interfaces offer even higher quality with resolutions up to 192 kHz and 32-bit depth.

One of the biggest determining factors when purchasing an audio interface are the I/O options. Some audio interfaces are equipped with a variety of preamps and line-level or instrument inputs for recording, while others feature inserts and line outputs for mixing. Pay special attention to make sure the interface you choose has enough inputs and outputs to accommodate your studio.

Most audio interfaces feature at least two preamps with XLR combo jacks, enabling you to record two channels simultaneously. These compact interfaces are perfect for simple stereo recordings or singer/songwriters who want to capture a live vocal and instrument performance. Some interfaces also include additional mic and line inputs for bigger recording sessions.

All recording interfaces will have at least two monitor outputs to connect a pair of studio monitors. Some interfaces feature additional line-level outputs for multiple speaker sets, surround sound mixes, or connecting hardware devices for external processing. Some even have dedicated re-amp outputs or re-amping guitars.

Most audio interfaces will also include one or more headphone outputs for monitoring performances or mixing. Typically, if there is more than one headphone output, you’ll have the option to create separate mixes.

Many audio interfaces also feature digital inputs and outputs for expanding your I/O capabilities, including S/PDIF, ADAT, and BNC for connecting external word clocks. Some devices even include MIDI I/O for connecting external keyboards, synthesizers and controllers. Of course, your interface will also feature some way to interface directly with a computer (more on that later).

Remember that audio interfaces are typically listed with the total possible number of inputs and outputs, including digital I/O. If you’re purchasing an audio interface for recording, make sure it has enough preamps to get the job done.

All audio interfaces feature monitor controllers to adjust studio monitor levels, and separate headphone output controls for independent level adjustment. Many audio interfaces also feature zero-latency monitoring controls, which can be used to blend the direct input signal with playback from your DAW for latency-free recording.

Many of these interfaces, such as the Universal Audio Apollo Series, Antelope Audio Zen Tour Series, and the new SSL2 interfaces are bundled with analog-modeled plug-ins to help you create professional-sounding mixes right from your home studio.

The most common types of audio interfaces connect directly to your computer using Thunderbolt, USB or Firewire connections. Some units offer multiple connection types, although most manufacturers offer specific models tailored to each specific connection. These devices are capable of recording high-quality audio up 24 bit / 192 kHz.

Ethernet audio interfaces utilize Dante audio-over-IP networking, which can be used to carry up to 64 high-quality digital audio signals over long distances. These solutions are ideal for large studios and complexes who want to record or mix in multiple rooms.

iOS interfaces connect directly to your iOS device, making it easier than ever to capture studio-quality recordings on the go. Perfect for recording live performances, interviews, podcasts and more, these compact devices fit in your bag and set up in no-time for quick and easy recording.

For those looking for a more permanent solution, PCI & PCIE cards install directly into your computer. However, these do not feature preamps or instrument inputs. Instead, they use DB25 or digital connections to interface with external devices, typically a permanently installed rack-mount unit.

Similarly, some manufacturers have created their own proprietary recording devices, which utilize similar cards. For more information, check out our selection of Hardware Expansion Cards. If you would like to purchase an audio interface or have questions about what will work best for your studio, we're here to help! Please contact a Vintage King Audio Consultant via email or by phone at 866.644.0160.
Categories: Buyer's Guides
Tags: featured, Universal Audio, Buyer's Guide, Antelope Audio, Recording, Focusrite, Recording Interfaces, Mixing, Audio Interfaces & Apogee
Posted By: Brad Pack