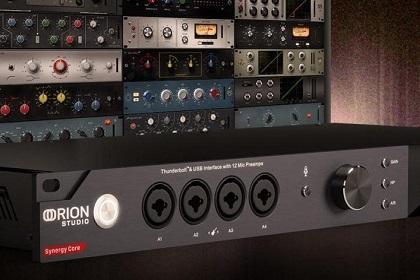 To kick off February 2020, Antelope Audio has announced some incredible promos on three of its new Synergy Core interfaces. When you purchase the Discrete 4 Synergy Core, Discrete 8 Synergy Core, or Orion Studio Synergy Core before March 15th, you'll receive a fantastic bundle of free microphones and FX with your order.

In this blog, we'll be covering what comes with each specific interface, and detail what's new in the Synergy Core series. Read on to find out how you can save big with Antelope and bring home even more new gear home in the process.

The Antelope Audio Discrete 4 is a small, but mighty interface that features four console grade, fully discrete mic pres and world-class conversion. As one of the first interfaces introduced by Antelope Audio to feature the new Synergy Core technology, the Discrete 4 features two DSP chips and one FPGA chip for processing your FX with extremely low latency.

When you purchase the Discrete 4 Synergy Core by March 15th, you'll receive two of Antelope Audio's Verge modeling microphones. The Verge is an ultra-handy small diaphragm condenser mic with a transparent response and high SPL handling. The modeling microphone features 13 different mic emulations, including some of the most beloved small diaphragm mics in recording history.

In addition to the free Verge microphones, you'll also get a bundle with 30+ FX, including the new Impresser FX. The Impresser is an "extremely versatile compressor with a distinct signature sound" that features controls for 19 different detector frequencies and some extreme dynamics control including the Nuke and "UK" mode.

The next step up from the Discrete 4 is the Antelope Audio Discrete 8 Synergy Core interface. This interface also features Synergy Core technology with two DSP chips and one FPGA chip, but expands further with more I/O. As its name implies, the Discrete 8 features eight console grade, fully discrete mic pres and is expandable up to 26 inputs and 30 outputs.

For this promo, customers purchasing the Antelope Audio Orion Studio Synergy Core will get a bundle of 50 FX, four Verge microphones, and an Edge Duo for free. The Antelope Audio Edge Duo has become a popular microphone modeling option, as the mic features a dual membrane large diaphragm design that can be used with 18 emulations. Whether you choose the mic emulation during recording or mixing is your option, but Antelope Audio enables you the ability to do both.