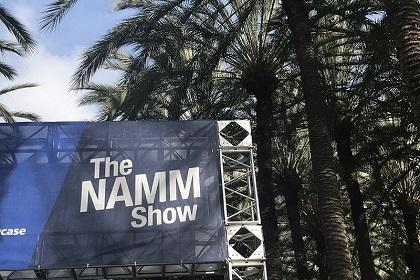 It's been an incredible week at the 2020 NAMM show, one that will have the pro audio community buzzing all the way until next year's show. There was a monumental amount of new releases on the convention center floor, and we're here to tell you about the best of what we saw.

From new monitors and outboard gear to interfaces and converters, the new releases at NAMM are all about bettering your audio signal and simplifying workflow. Read below to discover our top ten releases from the NAMM Show and check out our New At NAMM category to see everything that was announced.

The all-new SSL 2+ ($279) and SSL 2 ($229)  USB audio interfaces draw from over four decades of innovation and experience. With class-leading analog microphone preamps and pristine 24-bit / 192 kHz converters, the new SSL 2 Series USB audio interfaces will deliver studio-quality recordings. Inspired by the legendary SSL 4K console, the newly-designed "Legacy 4K" mode adds classic analog color and character to your recordings for that extra dose of vintage vibe. The interfaces feature an immaculate signal path and a high-current headphone amplifier to ensure crystal-clear playback while tracking or mixing.

Barefoot Sound has introduced its smallest and most affordable monitor yet! Tailor-made for today’s evolving production workflows, the Footprint02 ($1375/Single Monitor, $2750/Pair) is ideal for recording engineers, producers, composers, songwriters, musicians and beat-makers. The Footprint02 features four precision-tuned drivers arranged in an active three-way configuration to deliver stunning sound quality, wide dynamic range, and smooth bass response. Much of the same technology of the Footprint01 has made it over to this smaller cabinet, so you can expect the same sound (with 60% less volume).

The original RMX16 reverb is sonically magical and highly coveted, so AMS decided to revive the rackmount microprocessor and bring it to the 500 Series format. The new AMS RMS16 500 Series ($1295) employs nine of the same exact algorithms that were loaded in the original RMX16, and also features nine aftermarket programs for even more options.

Remember when we said companies were trying to streamline your workflow? Avid has done it in spades. The Avid Pro Tools | MTRX Studio ($4999) brings the popular MTRX down to a single rack unit size and is a powerful, all-in-one I/O, monitoring, and routing solution for your Pro Tools setup. It also allows for I/O of up to 64 channels of Dante to boot! In addition, Avid has announced several Thunderbolt 3 Chasis for HDX cards, including a desktop version ($499) and a rackmount version ($699) that can also hold a Mac Mini.

Fans of the recently discontinued Sub Phatty should be excited, as the Moog Subsequent 25 ($849) is a spiritual successor to the beloved synth first released in 2014. The new and improved Subsequent 25 is a 2-note paraphonic analog synth that combines the high-quality analog designs of classic Moog instruments with the versatile sound engine of a modern synthesizer.

Meris is going back to its 500 Series roots with a lunchbox size version of the best-selling Hedra pedal. The Hedra 500 Series Module ($549) is a rhythmic pitch shifter that is capable of adding three harmony voices to your instrument and features pitch glide, micro-tuning, four individual delay configurations, and adjustable pitch correction. In addition to this 500 Series module, Meris announced a collaboration with Chase Bliss Audio that brings the Lexicon 224 reverb to pedal with automated faders. More on the CXM 1978 to come soon!

After closing down shop at Inward Connections, Steve Firlotte teamed up with Tree Audio owner Ian Gardiner to revive his 500 Series line. The result of their work at Tree Audio are four new 500 Series modules, including the Tree Pre ($975), TreeQ 4($975), TreeQ 2($975), and Tree Comp($975).

Burl Audio's B26 ORCA rackmount has been a favorite solution for control room monitoring for years. So we were excited to see that the brand has downsized the 2U rackmount piece to a single daughter card ($2499 w/ ELMA Attenuator / $2099 ALPS Attenuator)  for the Burl B80 and B16 Motherships. Featuring the BURL NextGen BOPA14 op-amps, the B22 will deliver tight bass and high definition!