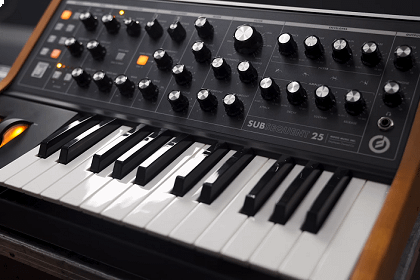 NAMM 2020 is here and Moog has officially announced it's brand new Subsequent 25 synthesizer. Ever since photos of the new synth were leaked around the start of the year, gear lovers everywhere have been salivating waiting to find out what the story is with this new creation.

Fans of the recently discontinued Sub Phatty should be excited, as the Subsequent 25 is a spiritual successor to the beloved synth first released in 2014. The new and improved Subsequent 25 is a 2-note paraphonic analog synth that combines the high-quality analog designs of classic Moog instruments with the versatile sound engine of a modern synthesizer.

In terms of upgrades, there are several, both sonic and cosmetic in nature. Upon initial inspection, the new wood side pieces giving the synth the classic Moog look. Under the hood of the Subsequent 25, users will find twice the headroom in both mono and duo modes, reshaped gain staging in the Ladder Filter, a re-tuned multidrive circuit, and a high-powered headphone amplifier.

Watch our demo video below to hear the all-new Moog Subsequent 25 in action. Continue on afterward to find out about the features used in the video and learn more about the different capabilities of the synthesizer.

Features of the Moog Subsequent 25

On the side of its sleek wood casing, Subsequent 25 features an array of inputs and outputs for connecting various studio devices. Connect Subsequent 25 to a recording console or external speaker using the 1/4” Audio Out. An unbalanced external audio input allows Subsequent 25 to shape and filter external sounds. USB, MIDI In, and MIDI out jacks make it easy to interface with external devices.

Connect your favorite expression pedal to the Pitch CV, Filter CV and Volume CV inputs to control output level, Filter Cutoff frequency, and pitch with your foot. The KB Gate input accepts a +5 volt signal, enabling you to trigger Envelopes with external devices. And to top it all off, a dedicated front-panel headphone output and volume controls make it easy to monitor your performance with your favorite headphones.

The Subsequent 25 features an impressive 32 front-panel knobs for sculpting complex tones and textures. At the far left side of the device, you can find the Presets Panel. Subsequent 25 ships with 16 presets, accessible through four banks and four patch buttons. Pressing the Activate Panel button puts Subsequent 25 in Panel mode, which lets you create new sounds using the front-panel controls.

Moog's latest synth is equipped with two dedicated oscillators, each capable of generating four basic waveforms: triangle, sawtooth, square, and pulse. The Octave knob sets the pitch range for that Oscillator, which is expressed in feet, similar to a pipe organ. Choose from four octaves ranging from 2’ all the way down to 16’.

A fully variable Wave knob is used to control that Oscillator’s waveform between the four wave shapes. To add fatness and depth to your tones, Oscillator 2 is equipped with a frequency knob, which allows you to fine-tune its pitch. A Hard Sync button eliminates phase issues when creating tones with both oscillators by locking Oscillator 2’s phase to Oscillator 1.

The Mixer lets you combine audio signals from each of the four internal sources: Oscillator 1, Oscillator 2, Sub Oscillator and the Noise Generator. Each audio source has a dedicated knob for controlling its relative level. Settings higher than six overdrive the Filter, while settings lower than six pass through cleanly without adding harmonics.

The Subsequent 25 Sub Oscillator is always tuned exactly one octave below Oscillator 1’s pitch, and its waveform is always a square wave. Typically, the Sub Oscillator is used to add a solid foundation to sounds and is especially useful for crafting monstrous Moog bass patches. The Subsequent 25 Noise Generator produces pink noise, which is useful for adding depth and weight to lead tones or even creating percussive sounds.

Subsequent 25 uses the classic Moog lowpass Ladder Filter with four selectable slopes. The Frequency Cutoff knob ranges from 20 Hz to 20 kHz, giving you full control over your sound. The Resonance knob causes a peak in amplitude at the Cutoff Frequency, and can even be set to self-oscillate.

Subsequent 25 shapes sounds using two Envelope Generators, or EGs. The Filter EG affects the timbre of your sound, while the Amplifier EG controls amplitude. Each of the Envelope Generators has four stages: Attack, Decay, Sustain, and Release. All but Sustain are measured in seconds, and range from 1 ms to 10 seconds. The Sustain knob is selectable from 1-10 and its value ranges from zero to 100 percent.

Control the low-frequency Oscillator’s modulation rate using the LFO Rate knob, which varies from 0.1 Hz (one cycle every 10 seconds) to 100 Hz—although these settings can be changed in Shift mode. The Source knob specifies whether the mod source is the LFO or the Filter Envelope. The LFO can be set to generate a triangle wave, a square wave, a sawtooth wave, ramp or reverse sawtooth waves, or select sample-and-hold as a mod source.

You can even tweak performance parameters with the Pitch Amount, Filter Amount and Wave Amount knobs. These controls adjust the amount of variation in pitch, Filter Cutoff Frequency and waveform shape applied when using the MOD wheel. For complex tones, press the Pitch Amount Oscillator 2 Only button, which applies pitch variations to Oscillator 2.

In addition to sculpting surreal soundscapes and fat, gritty tones, Subsequent 25 packs a ton of useful features under the hood. Fine-tune the frequency of your Oscillators and adjust the glide rate in the Global Pitch Controls Panel. You can also tweak your sound in real-time using the Pitch and Mod wheels located to the left of the keyboard. And that’s just the beginning. For even more control, you can use Shift mode to edit hidden parameters including keyboard transpose, voice modes filter slope and more.

If you’re looking for a high-quality compact synthesizer for live performance or sound design, check out the Moog Subsequent 25. It combines the classic workflow of Moog instruments with gritty analog tones for a truly indescribable playing experience.