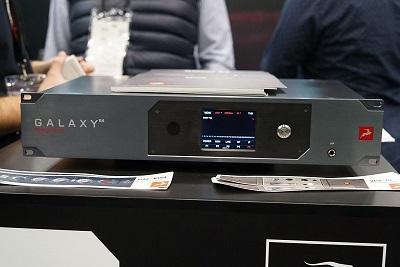 Antelope Audio is building out its interface lineup with two new releases for the 2020 NAMM Show. During the annual convention, the brand announced a Synergy Core version of the Zen Tour and the Galaxy 64 (a 64 channel 2U recording interface and converter).

Both of these interfaces include Synergy Core technology, which is Antelope Audio's next-generation signal processing platform. Antelope Audio now uses both FPGA and DSP processing to power up plug-ins and offer extremely low latency.

The Zen Tour was originally introduced in 2016 and offered band and performing artists access to an incredible portable interface. For 2020, the brand has upgraded the interface, most notably with more processing power like its brethren in the Synergy Core series.

The Synergy Core marks Antelope Audio's entry into the world of DSP processing chips. For the Zen Tour, the interface includes four DSP and two FPGA audio engine processors, which enable users to use more instances of effects without slowing down your workflow. Speaking of effects, the Zen Tour comes complete with 36 Synergy Core-exclusive effects like the Opto-2A, MES-432C, Comp-4k-Bus, and the new Auto-Tune Synergy.

While the Zen Tour Synergy Core is of small stature, the interface does offer an incredible amount of connectivity. Users will be able to take advantage of four Instrument/Line, four Mic/Line Ins, eight Line Outs, two Monitor Outs, and two Re-Amp Outs. The four discrete microphone preamps offer 75 dB of gain and are extremely transparent.

Antelope Audio's Galaxy 64 is another first for the brand, as it marks their entry into the world of DANTE. The Galaxy 64 is a 2U rack space audio interface/converter that features 64 channels of analog in and analog out via DANTE, Thunderbolt 3, AES/EBU, HDX, and MADI.

Just like the aforementioned Zen Tour, the Galaxy 64 is a Synergy Core and includes 12 DSP and three FPGA processors. These processors can handle extremely large sessions with hundreds of instances of effects, all while an additional FPGA chip processes the routing matrix and audio conversion.

No matter whether you are looking for a new interface solution in your studio, live venue, post-production facility, or any other audio hub, the Galaxy 64 offers the connectivity and conversion that your work requires. The high-quality converters of the Galaxy 64 offer 124 dB of dynamic range on the AD stage and 128 dB on the DA stage. Even monitoring conversion can be handled by the Galaxy 64 at 130 dB.