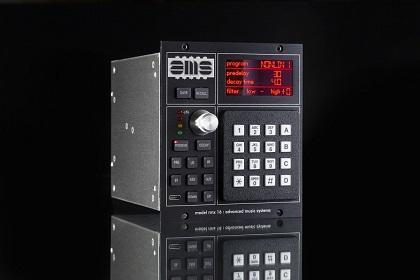 When talking about classic pieces of gear heard on hit records, the AMS RMX16 has easily earned its spot at the table. The reverb microprocessor became a must-use piece of gear in the 1980s and has gone on to become one of the most revered reverberation units ever. Just ahead of the 2020 NAMM Show, AMS has announced that they’re giving the classic unit the 500 series treatment with a new version of the RMX16.

While the original units were coveted and sonically magical, they also carried a massive price tag and thus were fairly rare and unattainable. With this new offering in 500 series form from AMS, a new generation of engineers will be able to use this reverb classic in their 500 Series rack for much less. The RMX16 500 series module is set to carry a price tag of just $1295, making its cost almost as small as its new, compact footprint.

The new AMS RMX16 500 Series Module comes loaded with the same nine standard programs that you’ll recognize immediately if you’re familiar with the original's sound. AMS has made sure to employ the same exact algorithms that were loaded in the original RMX16, so if you loved the first incarnation, you’ll find yourself at home with the new edition. On top of those nine classics, nine aftermarket programs have been loaded onto the RMX16 500, expanding your options even further.

At a time where many of the digital reverbs were being designed simply by mathematical algorithm after algorithm, the AMS RMX 16 was developed with musicality in mind for each of its programs. That’s a good part of why it remains a heavyweight reverb to this day. It just sounds great. With the studio environment changing, 500 series options make for better portability, a smaller footprint, and usually a smaller price point as well.

Rather than tracking down and paying heaps for a vintage example of the classic unit, studios are now enabled to toss the new RMX16 500 Series Module into their lunchbox rack and get to work instantly. With their new 500 series edition, AMS Neve gives you the tools to mix with the reverbs you hear every day on classic tracks, now in a more affordable and more compact frame.

If you are interested in ordering the AMS RMX16 or have questions about the new 500 Series module, please contact a Vintage King Audio Consultant via email or by phone at 866.644.0160.
Categories: News and Events & Around the Shop
Tags: featured, Reverb, 500 Series, AMS RMX16, Digital Reverb, AMS & RMX16
Posted By: Nathan Doyle