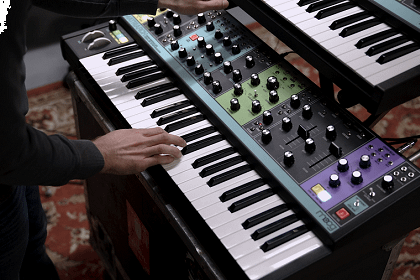 Throughout the past few years, Moog Music has been busy creating semi-modular synthesizers that have become instant classics upon their release. The Moog Matriarch and Grandmother have become the perfect tools for a wide array of musicians, as both have something to offer those just starting out and those who have been creating patches for decades.

If you were to quickly scan the Matriarch and Grandmother with a less than critical eye, the differences between the synths might not standout. The Matriarch builds off the Grandmother's semi-modular design, using the same oscillators, arpeggiator/sequencer, ADSR envelope generator, and ladder filter in its make-up. You'll notice a lot of the same colors and controls, but from there, things start to become different.

Moog's Matriarch amplifies your playability by expanding the Grandmother's monophonic sound. Via the Paraphony switch, you can choose between playing chords with four voices, a duophonic mode which splits the four oscillators into two voices, and mono mode which stacks all four voices on top of each other. The synthesizer also features stereo ladder filters, full-range analog LFO with six selectable waveshapes, and dual analog ADSR envelopes. Moog has dropped the beautiful spring reverb of the Grandmother, but in its place has installed an incredible sounding stereo delay based on Moog's MF-104M and 500 Series effects.

While much has been made of pitting the Matriarch and Grandmother against each other, we're going to end the comparison of features here. If you're interested in deep dives of either synthesizer, we have full demo videos below. The real reason that we're here today is to discuss how both of these synths can be used to replicate classic Moog tones and sounds that are out of this world.

Vintage King Audio's Dustin McLaughlin, Andrew Davis, and Cedric Yee recently headed into our video studio with two goals in mind. They wanted to recreate five classic sounds from the history of Moog synthesizers using the Grandmother and Matriarch, and additionally find five unique patches that push the boundaries of conventional synth playing. Watch our video below to see what the crew came up with and hear the feature sets of both synthesizers in action.