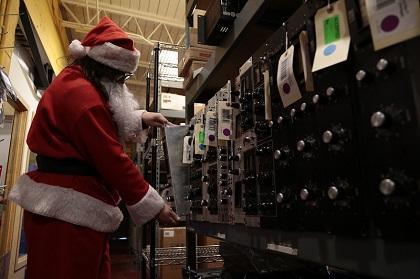 The holidays are here and we're certainly feeling it at Vintage King Audio. Our deep appreciation of all things vintage extends to the lost art of the classic holiday music compilation. So this year, we thought we'd try our hand at it.

Seven Vintage King Audio staff members contributed tracks to our new compilation, Merry And Bright. Some served up fiery songs from their current music projects, some collaborated with family members, and others hit the studio by themselves to create unique sounds.

We encourage you to check out this new yearly tradition from Vintage King Audio by listening below, but we're also asking a small favor. We are taking name-your-own-price donations for downloads of Merry And Bright and will be giving all of these contributions to Women's Audio Mission.

Women's Audio Mission is in an incredible organization who is helping to educate the next generation of female-identifying producers, engineers, and live sound staff. Learn more about their mission by visiting their website and check out our Inside Look at Women's Audio Mission below the compilation.

After listening to Merry And Bright, continue reading this blog to learn a little bit about all of the staff who created songs for the compilation and their recording process. Thanks to all my co-workers who contributed, and a special thanks to Jaclyn Sosnowski for her beautiful cover for the record and to Bryan Reilly for mastering it for us.

Ryan Mcguire (Vintage King Audio's President): For my song on the compilation, I did a rendition of Blue Christmas. I'm on vocals, guitar, bass, and mandolin, then my buddy Bob Mervak is on piano. Here are some of my session notes about the gear used:

Guitar and vocals were cut together live using a Neumann U47 into Shadow Hills Quad Gama with 1176 Rev F. Acoustic bass is a Telefunken U47 reissue into a Telefunken V76M with UnFairchild on compression. No DI signal, just miked. Mandolin was recorded using a stereo pair of Neumann KM84i mics that go through a Tele V76M and into the UnFairchild.

For Bob's piano, we miked it in two different ways. We used KM84i mics through V76Ms for up-close mics and blended that with 25% room mics. For the room mics, we used Coles 4038s that went into API 312 preamps. No compression, just automation.

The track was mixed through Burl AD/DA with an Antelope Audio 10MX on the API 2448. The mix was sent to an Ampex 351 1/4" tap machine running 456 tape then through the UnFairchild before coming back into Pro Tools via the Burl A/D. There is EMT 240 plate reverb on the mandolin and EMT 140 plate reverb on guitar and vocals.

Sonically, I was going after the colors and tones I hear on "Into the Mystic" by Van Morrison, which is one of my favorite sounding tracks.

Andrew Davis (Vintage King Audio's Webmaster/Developer): I received my first synthesizer from my stepfather for Christmas when I was 15. It was the Roland JX-8P, and it would be many years before I had the curiosity and desire to realize its true beauty. With a single data-slider and two-digit codes for each parameter, programming it can be a tedious, cerebral exercise. However, I've come to find that programming in this way, with foresight and intention, can yield some extremely nuanced and wonderful results.

Working with only the MIDI files for Ave Maria by Bach/Gounod as note & velocity input to the JX-8P, and using that instrument as the only sound source, I feel I was able to craft a love-letter of sorts to this wonderful synthesizer. It was the synth that first opened my mind to the joys and wonders of sound synthesis, using magical boxes to create beauty merely out of electrical current. The emotional, yet mathematical perfection of Bach and Gounod's composition inspired me to explore the mysterious depths the JX-8P has to offer, one two-digit code at a time.

During the day, Brian Rozman (Vintage King Audio's Web Order Processer) is part of the team at Vintage King Audio who makes sure your orders go through in a timely fashion. By night, he turns into Carjack, a robot-loving, beat-making, guitar-destroying performing machine who has been well at it in the Detroit music scene for over a decade.

Carjack's love of all things hip-hop led him to cover the Run-DMC yuletide classic, "Christmas In Hollis." The track was recorded in the band PUPILS practice space in Ferndale, Michigan with a live band and Stevyn Pivalsky doing Run's vocals and Carjack doing the DMC rhymes. Everything was committed to a Tascam eight-track cassette recorder via Shure SM57 and the horns were recorded with an Avantone CV-12. Carjack added DJ cuts, scratches and 808 bass kicks in post.

Kevin Schuck (Vintage King Audio's Central Region Sales Manager): For "That Feeling," I strictly used the Universal Audio Apollo Twin and worked completely in the box using headphones while my kids were sleeping! I used Arturia's synth collection with an Akai MIDI controller. As for the concept of the song, I wanted to do something that had a Daft Punk/Nile Rodgers-style thing to it and see how far I could take it.

The Holly Jollys - The Kids Christmas

Trevor Sturge (Vintage King Audio's Senior NetSuite Developer): Christmas has always been my favorite time of year. Just the thought of those same joys radiating through millions of kids (and let's be honest, most adults as well...) is inspiration enough to write a fun holiday song. I had my father and my son (age 11) involved with the writing of this song which made for an awesome generational family-related experience for us all. Merry Christmas and Happy Holidays from Wayne, Logan and Trev Sturge - The Holly Jollys.

Scotty Iulianelli (Vintage King Audio's Eastern Region Sales Manager): I'm not always sure what Mark (Bars of Gold's singer) is talking about in these songs, I am not sure he knows either, but the singalong is "This is for the people who WOOOOORK on Christmas!" This song features Julie and Loretta Lucas on background vocals and was recorded at Hi-Bias in Detroit by Chris Koltay.

E.M. Allen - The Flight Of Nine

E.M. Allen (Vintage King Audio's Content Director): I've always listened to artists that push far beyond the bounds of what can be called "music," but it never has really become a part of my songwriting. This year, I bought my first synthesizer, a Moog Grandmother, and as a result, it really has enabled me to go to a different place in my creative process. It's become something more therapeutic, as opposed to worrying about verses, choruses, and bridges.

Armed with the inspiration of recent reissues of Mort Garson's Plantasia and Laurie Spiegel's The Expanding Universe, I hit the Vintage King Audio video studio to create "The Flight of Nine." Y'know, nine... For all of Santa's reindeer? I kept things pretty minimal and actually used a lot of my pedalboard for effects on the way in, mainly the EarthQuaker Devices Avalanche Run. In addition to my Grandmother (which makes up a majority of the tracks), I used the Yamaha Reface CP for a few things because the on-board delay is incredible.

This was also my first time using a rackmount Universal Audio Apollo interface, which is now on my must-have list. I've enjoyed my interactions with the Apollo Twin and the brand's plug-ins before, but a rackmount Apollo is a beast. Like I said, my set-up was pretty straightforward, I found the Unison Helios pre plug-in to be tasteful for the Grandmother and I used the Ampeg ATR-102 for some flavor here and there. So that's it, my first foray into recording synth... Go easy on me!

Have questions about any of the gear mentioned in this blog? We can help! Contact a Vintage King Audio Consultant via email or by phone at 866.644.0160.
Categories: News and Events & Fun Stuff
Tags: featured, Vintage King, Holiday Sampler & Holiday Music
Posted By: Eric Allen