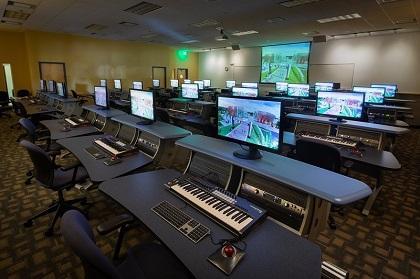 While Full Sail has always been known as one of the best institutes for a traditional recording education, the school's various course offerings have evolved since relocating to Winter Park, Florida. One of the biggest areas of growth for the school has been video game design. Full Sail's Game Design program has become one of the best in the country, and recently appeared on a list of top schools selected by the Princeton Review.

In order to stay on top, Full Sail works with Vintage King Audio to ensure students have access to industry-standard gear that will prepare them for the next step in their careers. When the school's recently wanted to upgrade interfaces in the Game Audio Lab and Mac Audio Lab, Vintage King Audio Sales Director Chris Bolitho pointed them in the direction of the Universal Audio Apollo Twin MKII and Apollo X6 interfaces.

"We selected the Apollo Twin MKII for the Game Audio Lab and the Apollo x6 for Mac Audio Lab because both units expose our students to all-in-one monitoring systems and Unison Preamp Emulation," says Darren Schneider, Head of Full Sail's Advanced Session Recording Department. "Having a full complement of Universal Audio plug-ins takes the student’s creativity to the next level in both sound design and music production.”

We recently sat down with Darren Schneider and Thomas Owen, Head of the Game Audio Department, to see how Full Sail University is using the Apollo Twin MKII and Apollo x6 to educate the next generation of game designers and audio creators.

Tell us a little bit about the Game Audio department at Full Sail University.

Thomas Owen: Around 12 years ago, two of our Recording Arts instructors [Tom Todia and Chris Latham], started a club for game audio in our Recording Arts program. The club met after class each week. The student interest was high enough that a class was developed around the topic of game audio.

Initially, the students were working with the Unreal Development Kit, which was a free version of the Unreal Engine 3. Now we have tools like UE4, Unity, and Wwise that are all free to use and build curriculum around.  We’ve expanded our game audio program to include eight different game audio courses between four separate degree programs at Full Sail.

We build multiple games for the students with software that’s essentially free for the students to use on their computers and learn from. Students work in our labs, as well as from home. Our Game Audio topics include sound design, music composition, and audio implementation.

Why did you decide to install new interfaces in the Game Audio Lab?
TO: It was time to upgrade our systems. We run a lab room with 18 student stations in it. Previously, we had used a Beyerdynamic Headzone interface in the Game Audio Lab. At the time, that allowed the students to listen to a 5.1 surround output out of a game engine in their headphones.

Now all of that summing is done in spatial audio plug-ins within Wwise, we can use any two-channel interface to do what we needed special hardware to do before. What we were looking for was really a high-quality desktop interface for the students to use in the lab. We needed something that would hold up to continuous use for five or six days a week for 12 hours a day.

Darren Schneider: The Apollo Twin also fits the profile of being a one-stop shop with a full monitor section. The headphone output is multed so the instructor can patch in with the student and listen to the same thing. Obviously, the plug-ins that they come with are a very nice selling point for us. Students also use these plug-ins when they are using the Apollo x6 interfaces in our Mac Audio Lab, so they’re seeing Universal Audio products in multiple classes and in multiple formats.

For these upgrades, we started looking at what we need and determined we needed control room volume and headphone volume controls, as well as something that could accommodate plug-ins processing for sound design. The relationship that we have built over time led us to finding the right option, which we then brought to Thomas in the Game Audio class.

TO: Awhile back, the Universal Audio Apollo Twins were a little harder to recommend when they were either just a Mac interface or a Windows interface. Since they've been updated to support both operating systems with the same hardware unit, we jumped on it. Most of our students are designing sounds on a Mac, but the primary operating system for implementation is Windows. We needed to find an interface that would work with both systems. Being able to use the same interface on either OS was a key component for us.

DS: It’s a lot of bang-for-your-buck when it comes to interfaces and value. Obviously, we knew the reliability and durability were there, but to get something of that quality at that price range is amazing.

How are you using the Apollo Twins in the Game Audio Lab?
TO: We have 20 Mac Pros in the Game Audio Lab, 18 student stations and two instructor stations. The interesting thing is, a lot of times, the students are recording gameplay of the work that they’ve been doing in the lab so that they can put it on a portfolio website or use it for their personal demo reel.

One of the great things about Universal Audio interfaces is the ability to use virtual channels within the Console software to be able to send the audio back from Wwise to be recorded in QuickTime. Previously, we had used other third-party tools like Soundflower or Loopback in order to route the signal in, but the Apollos helped us solve this by eliminating the third-party software, which was great.

How does the Mac Audio Lab differ from the Game Audio Lab?
DS: The Mac Audio Lab is a part of the Recording Arts program. There are 24 individual Pro Tools stations where students get their first interaction with Pro Tools. We're talking learning from the very basics all the way through to the PT210M and PT210P certifications that they'll receive. Each student will sit at a work station, and depending on what the material is, they'll learn about AUX sends or something else of that nature.

What made the Apollo x6 the right fit for that room?
DS:  In the Game Audio Lab, the set-up is much more about monitoring and the specific DAW hardware students are interacting with. For the Mac Audio Lab, we wanted something that was rackmount and had more processing power. The students using this room are using the interface in a traditional music sense, as they are interacting with Universal Audio Console, Pro Tools and using more plug-ins.

How have students taken to both the Apollo Twin, Apollo x6, and Universal Audio plug-ins?
DS: I think the biggest thing is they recognize the sound quality of the interfaces and the headphone systems. You can truly hear the difference with the Universal Audio interfaces. The plug-ins, we feel, are one of the closest things you can get to the original gear. Just being able to sit down and bring up a plug-in they've only heard about or someday might want to buy is really massive for the students.

What was it like working with Vintage King Audio?
DS: Chris Bolitho from Vintage King Audio has been working with us for years now. One of the advantages that we have as a company is, whenever we have an idea, Chris works with us to demo that gear/setup, letting us try it out in our environment to see if it works. That has been a big opportunity for us to really suss out what is the best piece for each given job.

Our relationship with Vintage King really gives us the ability to make solid decisions so we don’t look back and say, “I wish I would have tried something else.” I think that relationship is really important. When you have companies that support each other, it helps make better choices for our student's education.