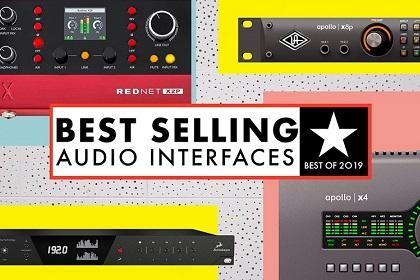 It's the last day of the year and what better way to spend the final hours of the decade than talking about the best selling audio interfaces of 2019. After all, this has been a huge year in recording gear and we've got a lot to cover!

The biggest trend of 2019 was the upgrade of interfaces that were already best sellers and giving them even more power and I/O. Universal Audio, Antelope Audio, and Focusrite were just a few major brands that did some reworking of their interfaces that helped them land on our list of top performers in 2019. Enough talk, let's get to the list!

Universal Audio’s rackmount Apollo audio interfaces need no introduction. They've only continued to gain steam throughout 2019. The beloved pro audio brand's four Apollo X interfaces boast the series best A to D conversion to date, Unison preamps, and 50% more processing power via HEXA Core processing. Not only did the Apollo x8 beat out its brethren, but the 18 x 24 I/O interface was also the best selling audio interface of the year at Vintage King Audio.

The RedNet X2P is a powerful tool that harnesses Focusrite's lineage in a small footprint. Utilizing Dante interfacing, the X2P provides clocking, mic pres, and headphone out, all controlled either on the top of the unit, or remotely when coupled with a Remote Lockout control. The two Red Evolution mic preamps provide super high-quality sound on the way in, and feature “AIR Mode,” which models the tone of the classic ISA preamp. The audio interface can be easily daisy-chained to other network devices, and the durable steel and aluminum chassis ensures that the Focusrite will withstand the toughest working conditions.

With 32 analog inputs, pristine mastering-grade conversion, and a suite of excellent onboard DSP driven effects, the Antelope Audio Orion 32+ Gen 3 has been a welcome addition to the world of audio interface offerings. The Orion 32+ Gen 3 provides streaming of up to 64 channels of audio at up to 24 bit, 192 kHz and is designed with Antelope Audio’s immaculate clocking.  In addition to the interface, Antelope Audio's FX collection gives you a suite of real-time effects like compression and reverb that will likely put your other plugins to shame.

The aforementioned Apollo X rackmount series inspired the Universal Audio team to further the design of the best-selling Apollo Twin MkII. In 2019, the brand released the Apollo Twin X, which is a 10 x 6 desktop interface that features two Unison mic preamps and one Hi-Z instrument input. This upgraded version of the Apollo Twin features the same stunning conversion as the Apollo X rackmount series. The Unison preamps provide for fantastic definition and allow the flexibility of utilizing models of iconic mic preamps like the Neve 1073 and the Helios Type 69. With compact desktop control, a robust build that makes for great portability, and A to D conversion that blows away many of the competitors, the Apollo Twin X is a fantastic interface.

Focusrite’s Scarlett 2i2 is one of the best selling audio interfaces of 2019, and it’s no surprise why. With its compact, streamlined footprint and USB connectivity, the Scarlett has long been the answer for musicians looking to be able to demo out new music when traveling, or simply having a budget-friendly solution for music creation at home. You’ll be shocked at the quality of the conversion considering the low price, and you’ll find creativity quickly with the included plug-in suites. Focusrite has made super high quality preamps at super affordable for years, and the Scarlett 2i2 is better than ever.

The Arrow from Universal Audio has been a great addition to their line of audio interfaces. The interface features two Unison preamps (the same used in desktop and rackmount Apollos) and offers the most affordable access to the world of UAD plug-ins and processsing. Super intuitive design and durable build quality make the Arrow excellent for musicians needing to pack a recording solution with them when on the go. As always, the Arrow includes a free suite of UAD plug-ins to get you started with tracking and mixing.

A bridge in the gap of the Apollo Twin X and the larger Apollo X rackmount units, the Apollo x4 benefits from more I/O than the Twin X, while retaining the sleek desktop footprint. As the name implies, you get four built-in preamps with Universal Audio's fantastic Unison technology, and the convenience in tracking is provided via a simple array of front panel buttons and rotary knob. The Apollo’s A to D conversion has been phenomenal since day one, but the Apollo X series and x4 interface features the best yet.

Another third generation Scarlett makes our top ten list of the best selling audio interfaces of 2019 and this time it's the Scarlett Solo. Small enough to fit in your hand, the Scarlett Solo gives you two ins, one for XLR cable and one for instrument cable, which makes it ideal for users who are singing and playing an instrument. Get down your ideas with the interface and the free copy of Abelton Live Lite that comes with it and you'll be releasing your own compositions in no time.

With a pocket-sized design, sleek controls, and excellent sound quality, the Babyface Pro is a great step up from the older Babyface. Utilizing USB connectivity, you’ll be tracking almost immediately with the two built-in super transparent mic preamps. For a smooth, desktop-sized recording solution at home, the Babyface Pro is great.

Apogee has staked its reputation on class-leading, crystal clear analog to digital conversion. For years, pros have turned to Apogee’s offerings when wanting no compromise recording quality in a high-end studio. The Symphony is the culmination of years of R&D and gives you the ability to capture your sounds at the absolute highest resolution.