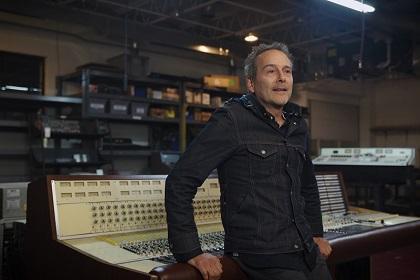 Earlier today, our friends over at Reverb shared a video that highlights Vintage King Audio via a trip through the Vintage King Tech Shop. Vintage King Audio co-founder Mike Nehra acts as your tour guide telling stories from the company's past and showing off some prized vintage gear currently in the shop.

If you haven't had a chance to check out Reverb's video, you can watch it below. Afterward, continue reading to learn more about the gear featured in the video, including classic pieces from Neumann, Neve, Telefunken/TAB, Universal Audio, and API Audio.

The first stop on Reverb's tour of the Vintage King Tech Shop is our vintage microphone room. Vintage King Audio Microphone Technician Tim "Timmo" Johnson was currently working on a pair of vintage Neumann U48s that were close to being consecutively numbered.

Released in 1957, the U48 is a variant of the U47, which is considered to be the ultimate tube condenser microphone. The mics are nearly identical in design, but the U48 adds the figure-eight polar pattern to its arsenal. George Martin would use the U48's figure-eight to record The Beatles' harmony vocals by having the boys stand on both sides of the microphone during tracking.

Neumann's U67 is known as a veritable studio workhorse. Use it on anything during a session and the results will make your hair stand on end. This particular U67 was formerly owned by producer Larry Klein, who used it on countless albums, including Joni Mitchell's Chalk Mark in a Rain Storm. During these sessions alone, the microphone was used for vocal takes by Mitchell, Willie Nelson, Don Henley, and Tom Petty.

Just like the aforementioned Neumann U67, this Neumann M49 comes with a unique pedigree. It used to belong to Media Sound in New York City and has the studio's name inscribed on its body. This studio was home to a who's who list of engineers, including Bob Clearmountain, Ed Stasium, Michael Brauer, Ron Saint Germain, and many more.

As for the microphone's design, the M49 features a dual-diaphragm build and was the first condenser to have switchable polar patterns. The microphone can be used in cardioid, omni-directional, figure-eight or anything in between the three.

Here we have two legendary compressor designs, both of which come from the storied Neve brand. The Neve 2254 is a classic mono limiter/compressor that is known for its rich, colorful tone and ability to thicken up weaker sounding sources.

Neve's 33609 compressor is also a diode bridge style compressor but has a sound and function all its own. Think faster and punchier. This classic stereo model features separate compressor and limiter sections per channel and is a must on the mix bus.

More masterful designs from Neve, including the brand's 31102 and 1100 mic pre/EQs. 31102 modules are known for being in the heavy-hitting Neve consoles of the 1970s like the 8058 and 8068. The 1100 modules feature a similar design, but uses Class A/B technology and has detented pots for easy recall.

Universal Audio's Bill Putnam is one of the godfathers of the recording studio and his 610 console has been used on some of the best albums ever committed to tape. Neil Young's Harvest, The Doors' LA Woman, and The Beach Boys' Pet Sounds were all recorded using Putnam's classic desk.

This particular Universal Audio 610 console is a custom-build, which features five original UA 610 A mic pres and six UA 610 B mic pres built by Steve Firlotte of Inward Connections. The desk was most recently owned by Arcade Fire, and the band used it for tracking the rhythm section on their album, Everything Now.

A Trio Of EMT 140 Plate Reverbs

The German company EMT first created artificial reverb units in 1957 to forgo the need of a classic echo chamber. While a massive 600-pound wooden box might not seem like a real space saver (especially compared to the plug-ins of today), EMT 140s certainly did the trick.

These units employ a steel frame that holds a large thin piece of sheet metal via springs attached to each corner of the outer structure. At the center of the piece of sheet metal, there is a transducer, which gets a signal from the studio's control room. The transducer vibrates the sheet metal and two pickups mounted to the plate pick up the resulting vibrations. The decay time of the reverb is controlled via dampener on the top of the EMT 140.

Vintage King Audio has become known for our masterful restoration work when it comes to vintage studio gear, especially recording consoles. This rare API Audio desk is owned by Electric Lady, and marks the second time that the world-famous studio has tasked Vintage King with reviving one of their consoles. Click here to read about our faithful restoration of their Neve 8078 in 2011.

If you're a fan of API Audio, you'll note the rarity of seeing one of the brand's consoles in white. Typically, all of API Audio's gear comes in their classic black and blue colors, so this desk is truly a unique find. The console itself is very similar to the one that formerly was located at the White Room, Mike and Andrew Nehra's studio where Vintage King Audio was started.