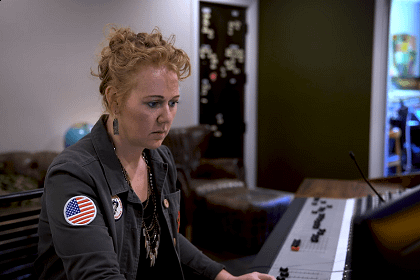 Driving through Nashville on the way to visit Jordan Brooke Hamlin, a few things quickly become apparent. Nashville is a city going through changes. There are more and more by the day. Cranes dot the skyline with further signs of progress, as new high-rise condos go up to house the masses flocking to Music City.

It's no wonder that Jordan, the ever-evolving musician, producer, and tinkerer, has put her workplace outside the hubbub of the honky-tonks on Broadway. Situated on 20 acres of serene land, MOXE is an incredible recording studio that allows space for Jordan's creativity to flourish. A handbuilt cloud diffuser here, a custom-designed microphone selector tool there... Anything the studio needs, she builds.

"We're building a mic choice robot system kind of thing and it's going to be 90% practical, but also 10% ridiculous," Jordan says. "The delight of that extra level does a thing to me psychologically. If I see the whimsy in the practicality, it's really satisfying to me for some reason."

During our recent trip to MOXE, we sat down with Jordan for a conversation about the buildout of the studio, the creative process and her approach to producing the artists she works with like Lucy Wainwright Roche and the Indigo Girls. Watch our new Make Your Mark below and continue on afterward for more excerpts from the interview and photos of the studio.

How do you go about choosing the projects that you will work on at MOXE?
I tend to get really picky about working on stuff and it has nothing to do with the metrics that I think people think it does. It really comes down to if I think the person can be in it with me. If the artist will get in the sandbox with me and co-create this moment. That requires a certain amount of vulnerability and chutzpah. As long as people are down to that, I feel like everything else will work out.

What does this studio space provide to those that work here, including yourself?
When you get in that certain "moment" of making a record, it can get sort of brutal. You're kind of fileted open emotionally, financially and all of these things. It's hard to manage the heightened intensity of that moment. I've found that certain things help me in aiding other artists get to their truer selves and get through that moment. We're on 20 acres here and that alone can chill me out and get me out of my head when I sort of froth up. It helps to stay out here as well. I will often hole up with people and there is a different experience when you can get in a space together for a long time. You start to trust each other and that's an important tool for going into making a record.

What's your favorite instrument to get sounds from in the studio?
I usually like to start with getting a map for the song because there are sort of emotional implications to if the tom sound is really round. For me, I really have to think those things on the front end, and it's fine to pivot, but I really like knowing and mapping out the recipe of what exists in the song that I don't want to stomp on. I want to honor those things sonically. To that end, I think vocals end up being huge. It really is a significant player in the scene and everything else kind of serves the rest of the space.

What made you choose the beautiful Rupert Neve Designs 5088 console at MOXE?
It's another one of those things that's perfectly in the center of a couple of poles for me. It's not hyper-colored, it's not too realistic where it's uninspiring. It does a great job of bringing in the actuality of things that are close-miked while still bringing in just enough of that sauce that makes it immediately enjoyable to listen to.

What's one moment that you've had in the studio that makes you grateful that this is what you get to do for a living?
I think I used to be really bad at that, bad at being present to appreciating and being really grateful for what a cool job it is. Sometimes it's really hard, very draining and takes a lot from you. In the past couple of years, I've been more awake and present to that part of the story.

I've had moments where an artist is having trouble working through something they are making. A lot of times its fears they have and not what things are sounding like in the room. I want them to be in on the realization that the work has its own life and its significant, and maybe it's beautiful or heartbreaking, but it's real, despite us being in the room.

If I have a moment where a player or artist or myself or anyone in the room gets kind of set free from that loop, those are some of my most satisfying moments. When I look back on a record and see the personal growth on it. It's like camp when you come out on the other side of that. You don't want your friends to leave and you have this crazy, cool record of that time together that connects you forever.

What's are you excited about in the future?
I'm excited about working in this space more and more. I'm working on a new ballet. I did my first ballet last year and I'm starting a new one this week. Working across disciplines at the same time, like I'm making R&B records and a ballet, that's a dream scenario for me, even though I didn't probably know it until I got into it.

If you'd like to hear some of Jordan Brooke Hamlin's work in the studio, listen to the tracks below from Lucy Wainwright Roche, Danni Nicholls, and the Indigo Girls.