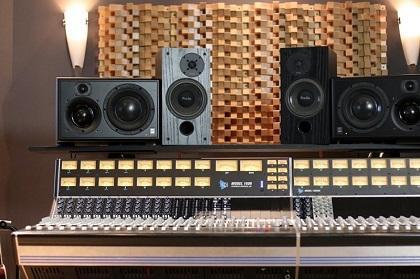 When it comes to listening back to our audio projects, studio monitors are an essential part of the equation. If you can't hear your recording, mixing, or mastering session through speakers that provide an honest assessment of your track, you'll never get the results that you desire.

If you feel that your current monitors are deceiving your ears, we're here to help! In this Buyer’s Guide, you’ll learn everything you need to know about studio monitors, including the differences between nearfield, midfield, farfield/mains, and subwoofers. Before we dive into that, it’s time for a quick history lesson.

The History of Studio Monitors

The very first reference monitor purpose-built for recording studios was the Altec Lansing Duplex 604 in 1944. Designed by James B. Lansing, the Altec 604 quickly became the industry standard studio monitor in the U.S. Shortly after the 604 gained popularity, Lansing left Altec to form his own company, JBL. Around the same time, Tannoy unveiled its Dual Concentric loudspeaker design, which became the industry standard in the UK.

The JBL 4310 studio monitor was the first nearfield studio monitor ever developed. Small enough to sit on the meter bridge of a console, the 4310 reduced many of the sonic issues caused by the listening environment. The 4310 quickly became one of the most successful products in the JBL catalog and reigned supreme as the monitor of choice for leading studios around the globe until the mid-80s.

The DIY ethos of the 1980s had led to a surge of smaller studios and artists with smaller budgets. Although they were originally introduced to the consumer market as a home speaker system, Yamaha NS-10 became the go-to studio monitor of the 1980s due to their compact size, affordable price tag, and their uncanny ability to highlight every flaw in a mix. Yamaha NS-10s can still be found in countless studios to this day. However, with the home recording revolution of the new millennium, the passive design of the NS-10 has fallen out of favor for more accurate powered designs.

Now that you know the history, let’s talk about the basic components of a studio monitor.

This is the box that holds all the components. Enclosures come in all shapes and sizes, depending on what type of studio monitor you are purchasing.

The crossover gets its name from its function, as it is a network of circuitry that determines where the frequency band gets split up and sent to different speakers. The points where the signal stops going to the woofer and heads for the midrange instead is one of the “crossover” points on the spectrum. Part of the reason for crossovers is simple energy management.

The subwoofer (or “sub”) is the basso profundo of the speaker world. It’s designed to reproduce all the lowest frequencies, sometimes even those you can’t hear, but only feel. A typical crossover frequency is 120 Hz; below that, the sub handles all the duties. It’s usually big and power-hungry, and despite its size, the sub can really help in nearfield monitoring due to the physics of sound.

The woofer handles the low end. In the early days of speaker design, this name was chosen to imitate the type of sound the larger speaker reproduces, i.e. the woofing of a dog. Yes, it’s that simple. More complicated is pinning down the exact specs of a woofer. In speaker design, everything is relative, so there is no fixed size for a woofer. It could be 4” or 15” across.

A true midrange will be part of a three-way (or more) monitor system, which is almost always found in main monitors. In nearfields, this driver is usually absent and its role split between the woofer and tweeter.

The tweeter reproduces the high end of the sonic spectrum. Its name is an imitation of the sounds it makes, such as the high-pitched tweeting of birds. A tweeter is also relative and has no fixed size; it may be larger in nearfields because it has to reproduce some of the midrange as well. In main monitors, the tweeter can be smaller since it handles a narrower spectrum, and there may be more than one.

Power amps make everything go on their “excursion,” the technical term for how far from its resting point a speaker will travel back and forth. In the past, this was always a standalone piece of gear, usually stored well away from the speaker because of its heat generation. More recently, the trend has been for active monitors to feature power amps inside the enclosure.

All monitoring systems require an enclosure to hold the speakers; a crossover to split the frequency bands for different speaker types, some combination of subwoofer, woofer, midrange and tweeter and a power amplifier to drive those speakers. The power amp can be internal, making the monitor self-powered or “active,” or it can be a piece of outboard gear, making the monitor “passive.” A majority of monitors today are self-powered, but plenty of passive models are still around, such as Amphion, ATC Loudspeakers, Auratone, Avantone, ProAc, and Quested.

Known for their compact size and affordability, nearfield monitors are some of the most popular models on the market. Designed to sit three to five-feet from the listening position, nearfield monitors use a simple two-way design with a compact four to eight-inch driver.

Due to their close proximity and low volume, nearfield monitors help minimize the impact of your room acoustics, making them the ideal choice for anyone working in an untreated environment. Nearfield speakers are also commonly used in pro studios for referencing a mix on smaller speakers—typically sitting on the meter bridge of a large format console.

Read our Buyer's Guide on nearfield monitors by clicking here.

This style of monitors typically uses a three-way design with an 8 to 10-inch bass driver to provide even, balanced frequency response at moderate playback levels. Due to their size and power, they can be placed farther from the listening position without an apparent loss of bass or detail. Midfield monitors also provide a larger sweet spot, making them ideal for collaborative projects.

Farfield monitors are the largest design of monitors, and are designed for use in large control rooms. Typically placed about 10 feet from the listening position, farfield monitors are capable of delivering the widest frequency response. However, due to their distance from the sweet spot, they’re also heavily impacted by the acoustics of the room, making them best-suited for heavily treated, purpose-designed control rooms.

Also called “mains,” farfields are known for their ability to withstand punishingly loud playback levels. Most farfield monitors use a three-way design, although some models range from 2-way all the way up to 4.5-way designs and higher. The bass and mid drivers on farfield monitors tend to range from 10 to 18-inches or more.

This style of monitor can still be found in many world-class studios. They’re typically soffit-mounted behind a large format console and mostly used for impressing clients with their high playback levels. However, in order to prevent ear fatigue, most mixing and critical listening is done using midfield monitors.

Subwoofers are designed to extend the low frequency response of smaller midfield and nearfield monitors. However, unlike nearfield monitors, subwoofers require high output levels to perform accurately, which tends to cause problems in small or untreated rooms.

This style of monitor typically features a single driver ranging from 12 to 24-inches. Generally speaking, larger drivers are able to produce a deeper bass response, although it varies depending on the excursion of the drivers. High excursion drivers produce more low-end, although they tend to be less accurate.

Subs are available in both sealed and ported cabs. While sealed cabs tend to limit the bass response and SPL of a sub, they do provide a cleaner, more accurate low-end response. Ported cabs are capable of achieving higher SPLs, making them ideal for larger studios or pairing with particularly loud midfield monitors.