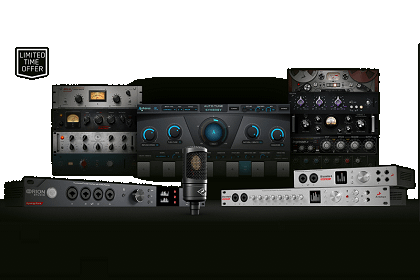 Antelope Audio has just announced that when you purchase any of these audio interfaces before Midnight on January 5th, 2020, you'll receive an incredible package of including an Edge Solo mic and free Vocal FX bundle and Auto-Tune Synergy plug-in. That's a lot to free goodness to digest, but let's start by talking about the new Antelope Auto-Tune plug-in.

Created in collaboration with Antares, this pitch correction tool allows you to listen in real-time during tracking without latency and adjust Retune Speed, Flex-Tune, and Humanize parameters. Engineers can also take advantage of Classic Mode, which is a revived version of Antares' classic Auto-Tune 5 sound.

In addition to the Auto-Tune Synergy plug-in, you'll also receive the Antelope Audio Vocal FX Bundle for free. This package of plug-ins features four emulations of studio classics that will take your vocal tracks to the next level. Here's a list of the plug-ins featured in this bundle:

BAE1073MP: The most esteemed of British microphone preamps, the BAE1073MP gives an instant studio sheen to any voice passing through it.

LANG-PEQ2: An all-star equalizer for vocals, the PEQ2 widens the mid-range, tightens the low-end and makes those highs shine.

Tubechild670: The sound of the ‘Golden Age of Rock & Roll’ – Tubechild670 makes vocals shine in the mix like nothing else with its thick and natural sound.

In addition to this free package of plug-ins, you'll also receive a free Edge Solo microphone with your Synergy Core interface. Antelope Audio's Edge series is made up of four modeling microphones that allow you to capture pristine audio and apply emulations of classic microphone sounds during the recording and mixing process.

Watch our demo video on the Antelope Audio Edge modeling microphones to get more familiar with the Edge Solo: