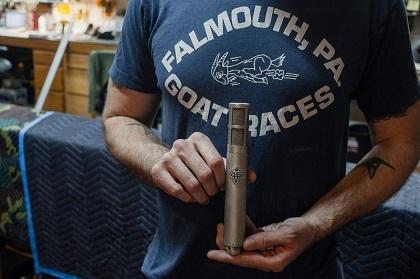 While walking around the Vintage King Audio Tech Shop, we saw microphone tech Tim Johnson (lovingly referred to as "Timmo" around these parts), working on something pretty special. It's not every day that we get a Neumann SM2 in for work, so we thought we'd shed a little light on the history of this fantastic mic.

Let's go back in time. The 1950s were revolutionary in terms of recording technology and Neumann was at the forefront of the industry. The brand set out to create the first stereo condenser microphone and did so with the SM2 in 1956. Here's an excerpt from the original Neumann SM2 brochure

"The Stereo Condenser Microphone SM2 is a top flight studio microphone. It features the outstanding qualities inherent in condenser microphones and their great versatility enables them to be used for solving the most complex recording problems.

Both microphones can be applied to a wide range of recording techniques. Since it contains, effectively, two single microphones in one unit, the SM2 may be used for various special applications. It was developed to stereophonic recordings, in particular for the "intensity system" but they can also be used advantageously, when two microphones of different directional characteristics are required in the same position."

The KM56 was the perfect choice for the world's first stereo microphone, as the dual-diaphragm capsule was small and switchable between omni, cardioid and figure-8. The SM2 features two KM56s mounted above one another with the top capsule having the ability to rotate 270 degrees when necessary for different miking techniques.

To adjust the polar patterns of the microphone and create different stereo recording options, the SM2 features selectable settings on its power supply. The power supply has the aforementioned omni, cardioid and figure-8 settings, in addition to three intermediate settings, which in total gives you nine different patterns for each element.

While the production period of the SM2 would be short-lived (Neumann stopped making them in 1966), the stereo microphone is still considered a classic in the studio. It's a favorite for engineers on piano, strings, and guitars, and Steve Albini is an avowed SM2 lover, as he uses them on drums in the Blumelin configuration.

Vintage King Audio is your resource for the best selection of vintage microphones in the world. If you're looking for something special, contact one of our Audio Consultants via email or by phone at 866.644.0160.
Categories: Around the Shop
Tags: featured, Neumann, Around The Shop, Stereo Miking, Stereo Microphone, Studio Microphone & Neumann SM2
Posted By: Eric Allen