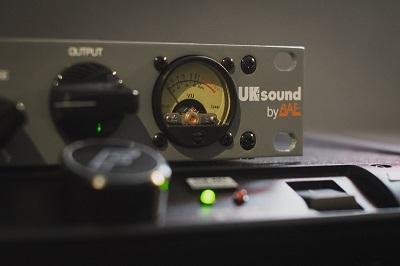 In late 2017, BAE Audio announced that they would be starting a new brand that continued to build on their legacy of recreating classic pieces of audio gear. Dubbed UK Sound, the company would kick off their product line with the 1173, which brought together a 1073-style mic pre and 1176-style compressor into one piece of gear.

Since the release of the 1173, UK Sound has been steadily increasing their output and announced four new products in late Summer 2019. Read our new Buyer's Guide below to get a complete breakdown of all of the offerings from UK Sound and learn the differences between each product.

As previously mentioned, the 1173 was the first product released by UK Sound and is based on the beloved 1073 and 1176. The brand was hoping to put both classics into a 1U rackmount piece for an affordable price and did just that with some help from renowned producer Warren Huart and gear designer Michael Stucker.

The on-board compressor remains true to the 1176 with classic FET compression. It features controls for Input and Output gain, in addition to four different Ratio options for compression. These ratios are the standard on a typical 1176-style compressor, including 4:1, 8:1, 12:1, and 20:1.

For the mic pre portion of the 1173, there are three ways to connect your microphone or instrument. Inputs on the unit include DI, Line, and Mic. The mic pre offers Gain control in increments of 5dB from 15dB to 70dB.

Most 1176 fans will surely be familiar with the "all buttons in" technique used on the vintage compressor. The 176 can also achieve the gritty sounds the 1176 would get in this mode. Since there is a knob for Ratio selection on the 176, all you have to do for "all buttons in" mode is click the "!" switch to on.

One other unique feature the 176 has is the switch for the SC Filter. When enabled, the SC Filter allows lower frequencies to pass without engaging the compressor, which will give you a more transparent sound.

If you're a big fan of 1960s and 70s style compression, the 276 Dual Channel FET Compressor is essential for you. This 1U rackmount piece of gear gives you two UK Sound 176 compressors with the opportunity to link both channels together. No matter the application (whether parallel compression, on the mix bus, etc), the 276 is a handy tool to help achieve vintage tones with pure analog power.

BAE Audio has always been known for their incredible reproductions of the 1073, and under the UK Sound banner, they are doing it once again. The new 73MP Single Channel Mic Pre is the first time UK Sound is offering a 1073-style mic pre on its own. This unit features a OEP Carnhill transformer coupled input, and gives engineers two selectable impedances (600/150 ohms), that will work with a wide variety of microphones.

If one 1073-style mic pre isn't enough for you, UK Sound has also announced the release of the 73MP Dual Channel Mic Pre. Featuring the same OEP Carnhill transformer, mic impedances, and Gain selection knob, as the standalone unit, this new tool from UK Sound gets you two channels of colorful analog goodness.

UK Sound has now introduced their first 500 Series module, the MPL 500 Series Mic Pre. Within the confines of this lunchbox sized casing, you'll get all of the mic pre power of the aforementioned 1073-style gear. There are the two mic impedances to choose from, selectable Gain control up to 71dB, and the rich low end and resonant highs that we've come to know and love over the decades. If you would like to purchase UK Sound gear for your studio, our team is ready to help you! Contact a Vintage King Audio Consultant via email or by phone at 866.644.0160.
Products in this Article
Categories: Buyer's Guides
Tags: featured, Mic Pre, Compressor, 1176, UK Sound, BAE Audio, 1073 & Mic Pre/EQ
Posted By: Eric Allen