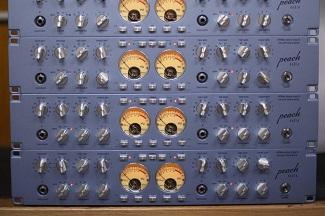 David Peach has been building high-end audio gear for over 35 years. His company, Peach Audio, is best known for their all-tube 196 series preamps, including the Savannah 196sx, which are all hand built in Australia. If you missed our new demo video of the Savannah 196sx, you can watch it by clicking here.

We recently had the pleasure of chatting with David about what makes his preamps so special. Read on to learn about how David got his start making gear, his approach to design, and what new products he’s been working on.

Tell me a little bit about why you started Peach Audio back in 1983.
I started playing guitar when I was eight-years-old. I got my first cheap electric when I was 12, but I couldn’t afford an amp. I saw an ad for an amplifier kit in an Australian electronics magazine, so I ordered one and my friend and I put it together using his dad's soldering iron. Of course, it didn’t work, but it sparked my interest in electronics.

After school, I studied electronics at North Sydney Technical High School. By then I was building and modifying guitar amps for people all around the neighborhood. In 1983, I got the opportunity to open a workshop next to a guitar repair shop called Rock Repairs and a second-hand PA shop called Smithy’s in North Sydney. I’ve been repairing and modifying all types of guitar amps for over 35 years. I think I’m starting to get pretty good at it by now.

In the mid-90s, I designed and hand-built an all-tube stereo 50w tube head with three separate preamps, which really escalated my interest in design and manufacturing. That’s when I started building Pultec EQP1as and LA-2As with my own design using tube amplifier stages.

I started developing my own preamp, the M196, around the turn of the century, which sounds kind of crazy to say. That first version evolved over a period of two years or so. The second version, the M196se, used a really complicated design that took about a month to put together. As I continued to develop the product I discovered new ways to tweak the sound, which led to the latest iteration, the Savannah 196sx.

Let's talk about the Savannah 196sx. Tell me about the different transformer options the pre has.
There’s a push-button on the front of the interface that allows you to bypass the XFMR transformer output. I included this for a couple of reasons. My personal preference is to use an output transformer, as it gives a differential low impedance output, which makes it compatible with almost every piece of equipment it’s connected to. I also like what transformers do naturally with the harmonic waterfall of a signal.

Bypassing the transformer uses a direct output from the cathode follower output stage, which gives an extra 12 dB of level as there is no impedance step-down. This also raises the minimum output impedance to 10K ohms unbalanced. This extra gain is great for ribbon mics.

How does the Savannah 196sx's A/B control work?
In A/B mode, the preamp operates as two totally independent identical amplifiers. In MS, or mid-side mode, mode both preamps are routed into an output transformer switching matrix. All of the preamp controls remain fully functional, except the OTL option. This technique for recording has been around for a long time. The preamp’s left line output contains the sum signals, while the right line output contains the subtracted signals.

Tell me about the design and the components of the Savannah 196sx.
After modifying and repairing outboard gear for over 35 years, I started to notice the declining quality of high-end audio products, mainly in the noise floor measurements. Things just don’t sound as good as they used to.

Maybe it’s because more companies started using switch-mode power supplies. It’s nearly impossible to eliminate the high frequency switching noise generated by those supplies. Or maybe it’s because of surface-mount technology for audio components and board tracks being reduced in size. Either way, I started listening closely to many brands.

In my understanding, the most important part of any product is the power supply, as it directly modulates the audio. By experimenting with different types of regulated power supplies, I found I could change the apparent speed and rhythm of the audio. So the concept behind these power supplies is to balance specification and musicality.

What do you think makes your Savannah 196sx tube preamp so special?
With the resolution of digital audio becoming more critical, I wanted to produce a product that could give these demanding results. By using an all-tube audio path supplied by 350v rails, regulated DC heaters, zero signal reference paths and paying attention to grounding, I was able to achieve a super-low noise floor. This allows you to capture a much larger resolution, similar to using a very high-quality lens on a camera.

When recording high-transient signals like kick, snare or vocals in a good acoustic space, these preamps maintain the original musical transient as well as the surrounding acoustic space to a greater degree than other high-end audio preamps.

How would you describe the company culture at Peach Audio?
Well, it’s a small, cottage industry. I outsource a few things, but I do a lot of the work myself. I get things engineered here in Australia— all of the transformers, machining and metal work is sourced locally. I get the boards manufactured overseas, and have a few people populating these boards. I do the final assembly and testing myself.

What's a typical day in the office like for you?
Stressful. I wish there were four of me to do it all. It’s quite critical that the quality control is super-duper high, which is why I do it all. It’s just me and a couple other people at this point, but that will evolve as time goes on.

I usually break my day into two or three sections. I get in around 7 am and do 3D design until about 10 o’clock. Then I’ll decide what needs to be done, whether it’s assembling more boards or running off to the machining people, answering emails. It’s a combination of everything.

My favorite thing is designing on 3D CAD though. These preamps are evolving through different revisions. I’m in the middle of another production run at the moment. I’m trying to learn different methods for metal work to make the builds more efficient.

What’s in store for the future of Peach Audio?
We’re working on a new product line called the Savannah series, which is my daughter’s name. I’m almost done with the EQ and the dynamics boxes now. I’m planning to release a new product every two years. I’m really excited to get them out into the world.