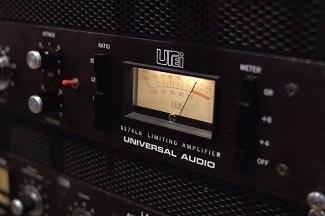 The Urei/Universal Audio 1176 is an icon in the recording studio and has had a profound influence on modern gear makers. So it's no surprise that many companies have sought to remake and add to the 1176 since it was first released in 1967. How do these 1176-influenced compressors compare to the original? That's what we set out to find in our latest shootout.

While there are many different 1176 emulations out there, we gathered a small group of gear, including reproductions, plug-ins, and pedals to take to The 45 Factory. This could have been an all rackmount compressor shootout, but we decided to offer up a variety of options at different price points. The list of gear in the shootout includes a vintage Urei 1176 Rev D, Universal Audio's modern 1176 LN reproduction, Origin Effects Cali76 Compact Deluxe, Origin Effects Cali76 Stacked, Universal Audio 1176LN plug-in, and Avid Pro Tools BF76 plug-in.

Watch below to hear each piece of gear go head-to-head on vocals, clean electric guitar, dirty electric guitar, bass, and drums. The performances in the video are from Olivia Millerschin, Dustin McLaughlin, and Bryan Reilly. If you're interested in picking up an 1176 or any of the gear inspired by the classic compressor, contact a Vintage King Audio Consultant via email or by phone at 866.644.0160
Products in this Article
Categories: Shootouts
Tags: Universal Audio, Avid, Pro Tools, Shootout, Guitar Pedal, Plug-Ins, VK Shootout, Compressor, Compression, 1176, UREI & Origin Effects
Posted By: Eric Allen