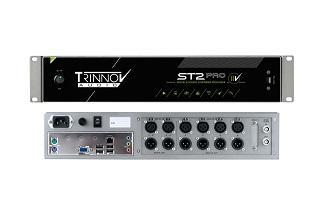 Since Trinnov Audio was founded in 2003, the brand has been improving the way we experience sound, both out in the world and in our recording/mixing facilities. Their approach is two-fold. Trinnov's impressive room correction technology helps acoustically optimize the monitors and room that audio is created in, while also allowing users to replicate listening environments like theatres and PA systems.

One of the keys to the Trinnov universe is the ST2 Pro. This monitor and room optimizer features four simultaneous processing channels, which supports any stereo speaker set-up with one or two subwoofers or bi-amp system. The ST2 Pro gives users the data and tools to set the target curve of their monitors and optimize the global acoustic response. And this is just the tip of the Trinnov iceberg...

In the latest issue of Sound on Sound, Phil Ward writes an in-depth review of the ST2 Pro and talks about how it compares to other room correction technology tools. You can find the full review here, or continue below to read some of the highlights.

Sound on Sound On The Need For Trinnov Technology

"If your efforts in audio production have long left behind the bedroom music hobby stage and it's vitally important that the work that leaves your studio is mixed and balanced to the highest professional standards, and will translate out there in the commercial world, the ST2 could be a tool that's absolutely justified."

"With the ST2 Pro doing its thing, the tonal balance was more naturally correct and the low-frequency bandwidth more extended, without appearing to lose any precision of timing or pitch. Stereo snapped more into focus and with greater portrayal of depth and more stable portrayal of off-center images."

"And the detail of all sorts of processing effects became more obviously apparent. Compression became explicit and reverb tails lasted longer. It was far easier to hear into a mix and identify its elements."

Sound On Sound On The Overall Experience Of The ST2 Pro

"Even though I occasionally pressed the bypass button and breathed a slight sigh of relief that I was back on familiar, if now obviously flawed, monitoring territory if you were to ask me to start work on a new project tomorrow, I'd absolutely want to do it with the ST2 Pro in place. Which is perhaps all you need to know. "

The Trinnov ST2 Pro has been a tool that we've been integrating into post-production houses and recording studios all over the world since its release. Its impact cannot be overstated, which we talk about it in our own ST2 Pro review a few years back.