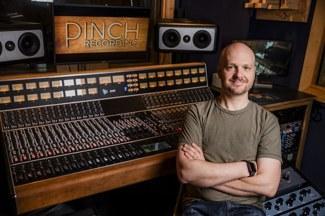 We recently had the pleasure of chatting with Scott about his experience purchasing an analog console from Vintage King. Read on to learn why Scott chose to upgrade to a large format console, the installation process, and how Pinch’s new API console has helped increase business.

Tell us a little bit about your studio, Pinch Recording
We built Pinch from scratch about four years ago. We rented this old wood factory in Long Island City with 20-foot ceilings and natural light. It’s a great spot for us because it lets us do what we need to do, but it also serves as a really nice environment for recording acoustic instruments, which is kind of our thing. The name came from a song called Pinch by the krautrock band Can. There are four owners of the studio and we all kind of came up through a style heavily influenced by krautrock.

The first year we were just building everything out. We did it all ourselves, we didn’t have any contractors. We had a studio designer that helped us design the space and gave us pointers on how to make acoustically treated walls and control room glass. I had an architectural framework to start from, but we actually built everything ourselves over the course of seven or eight months.

What made you decide to purchase an analog console?
Well, we weren’t working with a console for the first few years. We had a bunch of external mic pres, compressors, and EQs. We were primarily working in the box as far as mixing was concerned. We were using the Avid Artist Mix control surfaces, which worked well for a really long time, but my background comes from a large studio setting.

When I started to freelance, I transitioned to working in the box. This would have been in the early 2000s when Pro Tools was really popular. Working in the box was the new way to do things, both from a financial and workflow perspective. It’s what people had come to expect. People were hiring large-format studios less and less. That’s why a lot of the bigger studios closed during that era.

I was working in the box until very recently, but I’ve always wanted to purchase a console and go back to that old workflow. From a sonic perspective, I like the sound quality of console summing and analog warmth. It’s something I’ve always wanted to get back to. Consoles have definitely made a comeback in the last few years. A lot of the tools in the box now are trying to emulate analog gear, which is cool because it gives people who don’t have a console the ability to emulate that sound, but there’s nothing like the real thing!

It’s also great for staying competitive in the industry, especially in New York City. A lot of these successful studios now are working with large format consoles. I’ve already found that having an analog console has boosted our business dramatically.

What drew you to the API 2448?
I’ve always enjoyed the sound of API consoles; they’re super punchy, warm, and smooth. We were trying to decide between a Neve and an API, and we had certain restrictions regarding size. I think 32-channel is the largest size we could go for, which is what we ended up getting.

But we also wanted a new console. A lot of studios in New York have old Neve or SSL consoles, but they’re a lot of maintenance. That’s one of the reasons we wanted to get a new console. Plus, I wanted to get something I could grow with and really get to know. I want to know where every single piece of gear has been. That way, when the time comes when I do have to maintain it, I’ll already know how to do it myself.

As we were trying to decide on a console, the 2448 hit the market. It was a perfect situation. It was great because the 2448 is an in-line console and has the small faders as well as the large, which allows us to have an input and a monitor path, which is really important for our workflow. It all came together at exactly the right time.

You also installed a new patch bay and cabling system. How has that been?
We worked with Vintage King to purchase the console and to build us a custom patch bay. Honestly, the patch bay was one of the best parts. I was almost as excited for all new wiring as I was for the console itself. After years and years of the same wiring and the same patch bay, things just start going awry. Nothing sounds as good and jacks get dusty.

Getting the new patchbay was seriously one of the best experiences of my life. Everything is smooth, clean, and sounds great. I honestly believe that all new wiring is 50% of the sound we are now getting at Pinch. The way they built the patch bay was also incredible. All of the DB-25 cables were sent to us pre-labeled. It was super easy to install; well, as easy as it can be to install a patch bay, anyway. Vintage King did a really great job for us. It was fantastic to be able to say, “Build this,” and then they just sent us everything. It took this huge task out of our hands, which was awesome.

How was your experience working with Jeff Leibovich at Vintage King?
We’ve been working with Jeff for years, he’s been my go-to guy whenever I need gear. We bought pretty much all our microphones, most of our mic pres, and all our EQs from Jeff. As the studio grew, anytime I needed something I would just email Jeff.

The great thing about Jeff is that when I need something quickly, like if I have a session coming up in three days and I know that I need extra mics or whatever, I just email him and say, “I need these.” Within two hours he’ll send me an invoice and he overnights me what I need. Jeff gets the job done, he takes away all of the salesy stuff and gets me what I need quickly. And as far as the console goes, he was very knowledgeable.

Vintage King is great. Even if I just need to order cables or an SM57, all the way up to a 32-channel large format console, the process has been seamless throughout. I can’t say enough good stuff about Vintage King, they’ve done a really great job.

How have you been liking the new console?
It’s been great! The console is fantastic, it sounds really good. It’s perfect for integrating with Pro Tools and monitoring the digital world. You can interface the DAW via USB and act as a control surface. And the options on the 2448 are endless. I find myself spending 12 hours a day just sitting here trying to figure out the best configurations for various scenarios. And the automation is a whole world in itself.

Overall, we’ve done a few jazz sessions and the sound is noticeably 100% better from what we were doing before. I think with API summing, mic pres and EQs, and clean wiring, it’s kind of hard to mess it up. There are so many options, you want to use everything. The best thing I’ve found is to just send the mic through the pres into Pro Tools and it will sound great.

What’s in store for the future of Pinch Recording?
We want to utilize the space we currently have to make as much good music as we possibly can. One of our goals with Pinch was to create an environment where we could really make good music. We found that there wasn’t enough emphasis on the music at most corporate studios. he future of Pinch is to keep that focus and make sure we’re working on projects that are compelling, not just doing it because we need to make a buck, but because we really enjoy the process of making good music.