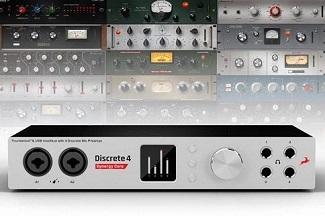 Antelope Audio has announced today that the next generation of their Discrete 4 interface will feature some new technology from the brand. The Discrete 4's new Synergy Core will be an exciting improvement to those looking for more processing power to come from their interface.

What's Synergy Core? The Synergy Core of the Discrete 4 interface features parallel processing power from twin DSP chips and an FPGA processor. Working together, the processors will reduce latency for users and take the processing load off their host computer, allowing the computer more power to handle samples, synths and other effects that require the heaviest lifting.

The Antelope Audio Discrete 4 Synergy Core comes packed with 25 of the brand's best-loved emulations. Now, with the power of the Synergy Core, you can run more of these plug-ins (including EQs, compressors and reverbs), than ever before without your recording and mixing experience slowing down or getting annoying clicks and pops.

The new generation of the Discrete 4 features the same I/O as the original. Whether you're connecting to your computer with Thunderbolt or USB, you have a whole host of options for inputs and outputs. The interface's front panel features two combi inputs (XLR and 1/4") and four separate headphone outputs,  while the back panel features two more combi inputs, two 1/4" outputs for monitoring and four lines out for interfacing with other outboard gear.

Antelope Audio has always been known for their incredible digital clocking and the Discrete 4 allows you to spread the love throughout your studio. The interface features Antelope Audio's 64-bit Acoustically Focused Clocking (AFC) jitter management algorithm, which can be sent to other digital gear via two 75-ohm BNC Word Clock outputs.

If the Discrete 4 has always seemed like a viable option for your studio, but you wanted an interface with more internal processing power, Antelope Audio has answered your prayers. Their new version of the interface (along with the forthcoming Discrete 8 Synergy Core), is souped up, set to go and ready to provide you with an extremely low latency recording and mixing experience.