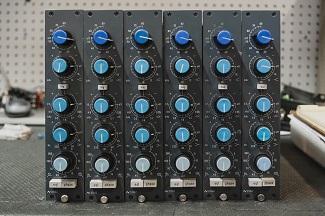 Justin Weiss, a technician over at the Vintage King Tech Shop, has been hard at work restoring and modding 16 vintage Neve 31102 modules. These input modules were designed and intended for use in Neve's large-format recording and mixing consoles, including the 8058 and 8068. These were the first "in-line monitor" desks on the market and gave the engineer tracking and monitoring options at each channel. We'll let Justin take it from here:

"Think of a quad summing mixer with small fader and extended mixdown capabilities and a global Mic/Line input switching option. This is the main reason a 31102 is different from all other 10-series (1066, 1073, 1084, etc) modules. The module, on its own, was built with a 10468 Mic input transformer inside and sensitivity switch (gain) setup for only mic levels. The line input signals comes from a companion 32430 Mixdown Switching Module (Line or Tape Returns) located directly below the 31102 in the 8058/68 desk. The switching module gives the user a Line trim missing from the sensitivity of the 31102 gain switch. So, again, the 31102 module was designed around the 8058/68 signal flow. It is worth realizing the purpose of the BA106 board being a buffer between the output of the line input switching module and the EQ built within the 31102 circuits.

The most common modification on a 31102 is to swap out the rotary gain switch, add a 31267 line input transformer and change the front panel screening in order to give the module both Mic and Line inputs with the correct front panel indication.  At this point, the module is technically identical to a Neve 1084, with the only differences being cosmetic (front panel/knob) design and the incorporation of the BA106 emitter follower board located inside the module.  We use the emitter follower in the Line input mod to mimic the actual line input signal flow that the 31102 module has while in use of an 8058/68 desk.  It is important to remember that we are discussing the modification of a module with an intent to be used outside of an 8058/68 desk, whether it be in a rack or sidecar."

Check out Justin Weiss' beautiful handiwork on these Neve 31102 modules below and take a close look to see his attention to the smallest details. In addition to the rotary gain switch mod, Justin has also used shrink tubing to wrap the internal wiring to get this as close to the original production pieces as possible. Whether you're interested in restored vintage gear or would like to have something from your studio modded, the Vintage King Tech Shop can help! Please contact a Vintage King Audio Consultant via email or by phone at 866.644.0160.