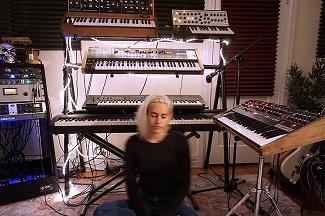 Jennifer Decilveo is a Grammy Award-nominated and Brit-nominated songwriter and producer based in Los Angeles. Best known for her work with Anne-Marie, Melanie Martinez, and Andra Day, Decilveo brings soulful sounds and vintage textures to every production.

We recently sat down for an interview with Jennifer for our ongoing 20 Questions series. Read on to learn more about her approach to songwriting and producing, her love for the LA-2A, and how her favorite plug-in is based on a garden hose in a box.

1. How did you get started making records?
Well, I’m a songwriter and a piano player first. I started producing maybe six or seven years ago because I’m a lover of sounds. I love trying to understand where noises come from.

Like others, when I was younger I liked a certain type of music, and I didn’t realize it at the time, but I like vintage and analog sounds. When I really discovered that, it kind of opened Pandora’s Box for me with the Prophet-6, or the Juno or the Moog. Once I discovered the warmth of analog, it was game over.

2. Can you tell us a little bit about your studio?
I have a space in Highland Park (Los Angeles) with a lot of vintage gear and analog synths. I run everything through two Universal Audio Apollo 8ps. I also have a Neve 1073, an LA-2A, and a 6176. I put those on everything from guitars to vocals and drums. There’s also a beautiful backyard with lots of lush green stuff that makes you feel like you’re in Big Sur instead of LA. That’s one of the biggest reasons I like it, honestly.

3. What are some of your favorite synths?
The Prophet-6. The presets sound exceptional, which gives you a great place to start. Plus, I record everything live through pedals and amps, and the Prophet-6 is really flexible in terms of connections. I also love my piano, which is a 1962 Schwander that just sounds amazing.

4. What do you use for miking your piano?
I have a couple of Royer R-121 ribbon mics that I leave on my piano, which obviously helps.

5. What’s your philosophy on producing?
It differs every time. If it’s a writing session, there are no rules. You don’t know what's going to happen — you just play some chords on an instrument and things start to happen.

When I’m alone and finding noises that I like and putting a track together, I’m a little bit more intentional, but when I’m trying to find the heartbeat of the song I try to let things come from thin air. I like mistakes and happy accidents and distortion. Pitch bending a synth might take my mind to a different place for the sound of the snare drum.

I’m definitely more of a crazy producer. I want you to be like ‘What the Hell is this?’ or ‘How did they get that sound?’ I just like weird stuff.

6. What’s your favorite part of the process?
It changes all the time. I’m a consistent learner, and at this point in my career, I’m really interested in mixing and refining sounds. I use a lot of Universal Audio plug-ins. I love throwing weird preamps or EQs or compressors on things I typically wouldn’t since I have them at my disposal. It helps me get noises to a place that I normally wouldn’t be able to get to without that kind of gear. So, at this point in my journey, my favorite part is manipulating sounds and blowing them up to the point where you can almost touch them.

7. What’s an average day in the studio like for you?
There is never an average day. Every day is different. I could be producing or writing or mixing. Every artist is different too. Some artists want to finish everything on day one, some artists just want to write on day one. And sometimes I’m producing alone, which is also fun. But no two days are the same. And that’s the coolest part — I feel like I’m a vessel to help them articulate their vision, facilitate things and help them realize things sonically. Since every artist is different, it’s always like a new sandbox with new toys.

8. What mics do you use most often?
I have the Manley Reference Cardioid Mic, which I use on vocals. I use a Shure SM57 on my Superchamp amp and a Shure SM7b for vocals sometimes. I use the Telefunken AR-70 stereo tube condenser microphone and the M60 FET cardioid stereo mics.

9. What EQs do you reach for most often?
Honestly, I mostly just use Fab Filter Pro-Q2 and the stock Logic EQs but for some extra love and that classic sound vibe, my go to is the Helios Type 69.

10. What about compressors?
I have an LA-2A that I love on vocals and drums. I use the Universal Audio 6176 on acoustic guitar a lot. I use a lot of compressor plugins too, especially the Fairchild 670 and the Helios.

11. What’s the least expensive piece of gear you’ve ever used on a record?
That’s a tough one… I honestly have no idea. Can I say handclaps? I have this cool shaker from Costa Rica.

12. What’s the weirdest thing you’ve ever done on a record?
Well, it’s not something I did on purpose, but one time I left the monitors up in front of a live mic and there was this tremendous feedback while I was recording, but the low end was so significant that I ended up using it as an 808. It was so sick.

13. What do you do in your free time, when you’re not making records?
I love eating at amazing l restaurants and love going to yoga. I go to the beach as much as possible and love traveling to places that have greenery and trees.

14. What’s your favorite place to eat?
I really like Jon & Vinny’s on in Los Angeles, but I also really love Houston’s which is this incredible chain restaurant.

15. What’s the best book you’ve ever read?
East of Eden by John Steinbeck. I’ve read it like five times.

16. What are some of your favorite artists of all time?
I love Tori Amos, I think she’s genius. I think John Fogerty and CCR are exceptional. In Color by Jamie XX is great. It’s a lot of different kinds of music. When I was a kid my parents had on everything from Supertramp to REO Speedwagon to the Supremes and Billy Joel and the Beatles.

17. What kind of music have you been listening to lately?
My musical taste is all over the place, but I love Gesaffelstein, Nine Inch Nails, Brandi Carlisle, Jamie XX, Twigs, Aretha, Donny Hathaway, and Regina Spektor. I love old-school Eminem and Dr. Dre too. I’ve been really into Khruangbin and Frank Ocean lately.

18. What has changed most about your production style or technique over the years?
Discovering analog and vintage sounds. That also really changed my workflow. Now that I have everything set up I can patch in new synths in a couple of seconds. Everything goes into an audio switcher so I can audition different synth sounds. It really helps speed up the songwriting and production process.

19. What’s one piece of gear you can’t live without?
Probably the Prophet-6. Or the [Universal Audio] Cooper Time Cube, I love that thing. So basically it was a coiled-up garden hose in a box and you would shout into it and it would create this crazy delay sound. I also love the LA-2A, it just adds warmth to everything. Or the Neve 1073 preamp. You put it on anything and all of a sudden it just sounds a little warmer. I think that's super, super cool.

20. What's one piece of advice that you have for aspiring producers?
You’ve got to put in your 10,000 hours. And never stop learning, never stop being a student. From real tangible analog gear to the plug-ins, knowledge is power.

Check out some of Jennifer Decilveo's production and writing work below on tracks from Andra Day, Anne Marie and Beth Ditto. If you’re interested in learning more about any of the gear mentioned in this 20 Questions interview, contact a Vintage King Audio Consultant via email or by phone at 866.644.0160
Products in this Article
Categories: 20 Questions
Tags: featured, 20 Questions, Producer, Engineer, Songwriter, Jennifer Decilveo & Interview
Posted By: Brad Pack