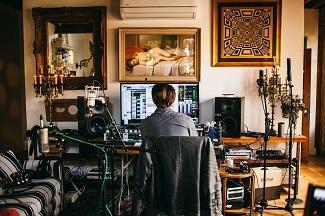 One of the reasons working in the recording studio is so great is the sense of spontaneity that can often be associated with it. Whether it's going into the booth with nothing written down or pairing with a collaborator you've never worked with before, these moments often lead to some of our best musical output.

For the past ten years, adidas has aimed to inspire artists by putting them in these types of creative situations. It started with their Song From Scratch video series, which asked artists to complete a song on the fly and in a single sitting. More recently, the brand expanded on the concept with Creator Camp.

The idea behind Creator Camp is simple. adidas rented out the famed Paramour Estate in Los Angeles and filled it with 20 musicians from various backgrounds. Over the course of a weeklong 24/7 creative workshop, artists were able to write, practice, and record in four studio spaces set up with gear from Vintage King. If you're interested in any of the gear used at adidas Creator Camp, contact a Vintage King Audio Consultant via email or by phone at 866.644.0160