Eight Reasons To Upgrade To The Dangerous Music D-Box+ 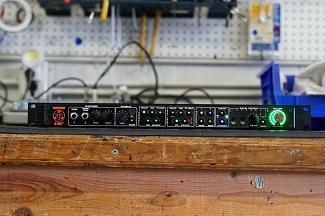 Earlier this year at the 2019 NAMM Show, Dangerous Music announced that they would be releasing an updated version of their D-Box summing mixer and monitor controller. How do you improve on a modern classic? Dangerous Music did it! The redubbed D-BOX+ features a number of new upgrades, in addition to all of the classic features that made us fall in love in the first place. We caught up with Marek Stycos from Dangerous Music and he offered up eight reasons to make the jump to the D-BOX+.

"The D-Box+ allows you to instantly A/B your work against commercial releases without being distracted by software. Whether it's using Bluetooth on a smartphone, laptop or any other external units, there's no need to deal with Total Mix, Maestro or other menu-driven interfaces. In terms of inputs, the D-BOX+ has three digital inputs, which can be used with your DAW software, computer's digital output, and Bluetooth. Additionally, D-BOX+has an analog input that can be set to +4dBu or -10dBV."

"We scoured the world for a digitally controlled attenuator (DCA) that Chris Muth liked the sound of and found it to maximize dynamic range, headroom, crosstalk rejection, and sound quality. Compare it to any other interface and you'll have an ear-opening celebration."

"It’s not a good idea to mix songs listening to only one point of reference. Most people will print a mix and go to their car and hear problems that they have to fix. D-BOX+ offers simple speaker switching for three pairs of speakers (or a sub) It will save people a lot of round trips to their cars."

4. Monitoring Your Mixes In Mono

"Listening in mono is a lost art. It is absolutely necessary to make sure the mixes translate. Most clubs are wired in mono. Anyone making dance music or hip-hop must check and adjust their mixes in mono or it will be lost to the audience. Additionally, half the world is listening in mono, as a stereo iPhone speakers are 2” apart. D-BOX+ has a simple mono monitoring button that makes it easy to reference and track with your monitors if you so choose. Combined with the speaker switching button, it’ll help your mixes sound better and translate better to the real world."

5. Talkback Functionality For Your Studio

"Most interfaces don’t offer talkback functionality. Anyone recording vocals (even if they use a spare bedroom as a vocal booth), needs talkback. D-BOX+ has a full talkback system featuring momentoggle functionality. It has a built-in mic with level control and can also be engaged or spoken through by your smartphone. You can use one of the D-BOX+ headphone preamps as an out by turning off all the inputs and talkback will still pass through."

"Because of the extra layer of software needed to route anything to anything with all-in-one interfaces, it’s difficult to create different cue mixes for artists and engineers. Very few home studios have three or four pairs of matching headphones, which makes it hard to level things. Y cables suck. D-BOX+ adds two separate headphone preamps (front and rear addressable) with grabbable volume controls to your rig. No need for matched headphones and everyone can listen at the volume they enjoy. This gives the engineer a simple way to switch from speakers to phones while inspiring the talent with potent headphone amps."

"Most interfaces sound good but none can claim to have mastering level converters. There is a reason why mastering houses work with separate high-end monitoring converters. With a centralized converter and centralized monitoring circuitry, you get to truly hear the difference between your sources (both analog and digital), as opposed to hearing mostly differences between pieces of gear."

8. The Benefits Of Analog Summing

"On top of all the above points, users can benefit from the eight channels of analog summing that are built into the D-BOX+. The ability to use analog summing will result in better mixes right away. Less distortion, less collapsing of the stereo image."
If you're interested in ordering or learning more about the Dangerous Music D-BOX+, please contact a Vintage King Audio Consultant via email or by phone at 866.644.0160.
Products in this Article
Categories: Product News
Tags: Dangerous Music
Posted By: Eric Allen