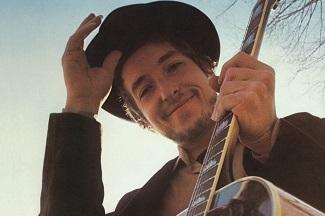 Bob Dylan is arguably one of the most celebrated artists in American history. His insightful lyrics and innovative arrangements appealed to the burgeoning civil rights movement of the 1960s with counterculture anthems like “Blowin’ in the Wind” (1963) and “The Times They Are a-Changin’” (1964).

In 1965, Dylan caused controversy when he traded in his acoustic guitar for an electric. He went on to record a trilogy of rock records that changed the genre forever: Bringing It All Back Home (1965), Highway 61 Revisited (1965), and Blonde on Blonde (1966).

But it wasn’t until 1969 that Dylan would shock the world by going country with his ninth studio album, Nashville Skyline. Read on to learn how this country masterpiece was made and how it holds up 50 years later.

The story of Nashville Skyline begins in the summer of 1965. After Dylan recorded his seminal song “Like A Rolling Stone,” he had a falling out with his producer Tom Wilson while recording Highway 61 Revisited. Bob Johnston stepped in to finish recording the remaining songs. Dylan writes about working with Johnston in his 2004 autobiography, Chronicles: Volume One:

“Johnston had fire in his eyes. He had that thing that some people call 'Momentum'. You could see it in his face and he shared that fire, that spirit. Columbia's leading folk and country producer, he was born one hundred years too late. He should have been wearing a wide cape, a plumed hat, and riding with his sword held high. Johnston disregarded any warning that might get in his way... Johnston lived on low country barbecue, and he was all charm.”

While recording in Studio A of Columbia Records in New York City, Johnston suggested they get a fresh perspective by finishing the record in Nashville. Dylan was receptive to the idea, but his manager Albert Grossman was not. Johnston recalls the exchange in a 2010 interview with Sound On Sound:

"I was standing there with Dylan, his manager Albert Grossman, Clive Davis and the President of Columbia Records, Bill Gallagher, and I said, 'Dylan, you've gotta go down to Nashville sometime. They've got the studio straightened out down there — I made sure they got rid of all the little rooms with a saw and a sledgehammer so that it's one big room. The musicians are great there, and you can do anything you want to, all in the room together.' He said, 'Hmm.' He would never answer you, but, just like Jack Benny, he'd put his thumb up to his chin and think about what you'd said, and in this case he then walked out and Grossman, Davis and Gallagher came over to me and basically said, 'If you ever mention Nashville to Bob Dylan again, you're fired.' When I said, 'Why?' I was told, 'Because we don't want him working with a bunch of goddamn stupid people down there. You've got him going good here, and it looks like we're going to have a great record. So keep it that way and just remember what we told you.' I said, 'Yes, sir, you're the boss.'"

Eventually, Johnson convinced Dylan that they should record his next record in Nashville. Ever the rule-breakers, the duo headed south to Nashville six months later to begin recording Blonde on Blonde, which is often cited as one of the greatest albums of all time.

In 1967, they returned to Columbia Studios in Nashville with Bob Johnston to record his eighth studio album, John Wesley Harding. Two years later, Dylan and Johnston teamed up again to record one of Dylan’s best-selling records, Nashville Skyline.

Recording for Nashville Skyline began on February 12th, 1969 in Studio A of Columbia Studios in Nashville. The space featured a large live room with a small isolation booth in the center. Johnston placed the musicians all around the room and captured each performance live to tape with no overdubs. Johnston recalls the setup in an interview:

“They could all play and watch each other. The room was so large, it looked like a football field, and the drums were in the middle, up against the back wall. Then, in the center of the room, I had this glass booth built for Dylan, and he was in there with a table and chair — it was like his study. He’d sit in there, stand up, turn around and do whatever he wanted to do, and I usually had three mics in there so that if he turned his head to the left or right, I wouldn't miss anything.

Their speakers were all in different rooms, and the guitarists had 50‑ or 60‑foot cords so they could walk anywhere they wanted to. They were scattered all over the room, and I had them move around on purpose.

Spillage wasn't a problem with me, because I wanted everything that I heard. I just told everyone not to play anything that they didn't want to be heard, because I wouldn't be allowing them to come back in for overdubs and screw up the record. We were only gonna use what they did during the actual take.”

Recording sessions can often drag on for days as artists try to nail the perfect take or capture the perfect tone. But the Nashville Skyline sessions were painless. Johnston comments on Dylan’s genius in an interview:

"Nobody ever counted off for Bob Dylan. 'One‑two‑three' — nobody did that. He had a metronome in his head, his foot started going, everyone else latched on and that was it. No matter what he cut, when he cut it, how he cut it or who he cut it with, it was always the same. He was a genius, and I never told him how to sing, when to sing, what to sing or where to sing. And I also never said, 'I don't like this,' or 'I don't like that.' I liked everything he did. I was awed by him and what he could do.”

Dylan also remembers the sessions coming together quickly in this interview with Rolling Stone:

“We just take a song; I play it and everyone else just sort of fills in behind it. No sooner you got that done, and at the same time you’re doing that, there’s someone in the control booth who’s turning all those dials to where the proper sound is coming in… and then it’s done. Just like that.”

While Nashville Skyline is often remembered for its quaint lyrical themes and simple songwriting structures, it’s also one of Dylan’s most unique vocal performances.

Known for his… interesting vocal tone, Dylan’s voice changed drastically from record to record. But Nashville Skyline was the first to introduce a low, crooning tone. Johnston says he had nothing to do with the change in timbre; it was all due to Dylan himself:

“If you listen to all of the records in a row — Highway 61, Blonde on Blonde, John Wesley Harding and Nashville Skyline — you'll notice his voice changes on every one. It's just something that happened. Skyline was just the most noticeable change. I never changed microphones on him. Hell, if he came in singing like The Chipmunks, and if Johnny Cash came in playing a ukulele, I couldn’t care less, because they all knew something no one else knew — they were artists.

What I used on his vocals — and what I used on Johnny Cash, Patti Paige, Marty Robbins and many others — was a [Neumann] U47 microphone with a power pack. It was the old one and nothing was better. I put a baffle over the top of Dylan's guitar so he could play while he sang, and I also used some EQ on his voice, but I never tried to change his sound. All I did was change sounds in terms of the mechanics. Whatever Dylan did — from Highway 61 through Blonde on Blonde, John Wesley Harding, Nashville Skyline, Self Portrait and New Morning — happened because he himself had changed. I never knew what he was going to sound like and I never cared. He was growing.”

The album was released on April 9, 1969 by Columbia Records. Despite the dramatic shift in direction, the press gave the record a warm reception. Rolling Stone wrote;

“Nashville Skyline achieves the artistically impossible: a deep, humane, and interesting statement about being happy. It could well be... his best album."

It did, in fact, go on to become one of Dylan’s best-selling albums, reaching No. 3 in the U.S. and eventually being certified platinum by the RIAA. Now, 50 years later, Nashville Skyline withstands the test of time as one of the greatest country records.

Products in this Article
Categories: News and Events
Posted By: Brad Pack