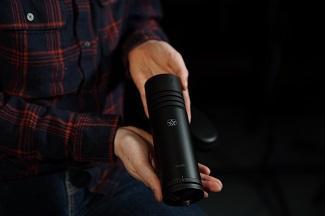 Aston Microphones set the pro audio world ablaze in 2016 when they introduced their first releases, the Origin and Spirit. In the time since, they've continued to design innovative microphones with a similar hearty build aesthetic, traits that both extend to their brand new Stealth mic.

The word "unique" is only a starting point for defining the Aston Stealth. The microphone features an internal Class A preamp, an internal shock mount system, and four different voice settings that will give users a wide range of options to use in the studio. Each of these voice settings feature their own high-quality signal path, which helps to keep phase distortion to a minimum.

Watch our new demo video for the Aston Stealth to hear the microphone on a number of different sound sources. Continue below to learn more about the Stealth's feature set, including the four different voice settings and the microphone's ability to be used in both passive and active mode.

For the Stealth, Aston went through a rigorous research and development process, working with a panel of 90 top recording engineers to taste test and better define these voice settings. In terms of what you get with the microphone, there are two different "Vocal" settings, a "Guitar" setting and the "Dark" setting.

With "Vocal 1," the panel concluded that the setting sounded best on male vocalists, regardless of pitch. "Vocal 2" was selected as best for female voices. The "Guitar" setting is meant to be used on six-stringed instruments, but performs well whether placed in front of a nylon-string acoustic or a stack of amplifiers. The Stealth's last setting, "Dark," is meant to replicate the vibes of a vintage-style ribbon microphone.

Technically speaking, the Aston Stealth is a moving-coil microphone, but what makes it so unique is that it is also a dynamic mic. The Stealth can be used with or without 48 V phantom power and features an autodetect mode, so that it will automatically switch. Even with the internal preamp, you can use the microphone in dynamic mode with any other preamp of your choosing.

Something that Aston Microphones has always put a priority on is build quality and they've done it once again with the Stealth. The microphone's body features a hearty build. It's still easy to wield in the studio though, thanks to a built-in XLR output and quick release stand mount. Internally, the Stealth's capsule resides in its own shock mount which isolates it from the rest of the chassis and allows you to use the microphone without a shock mount.

Based on our previous experiences with the Origin, Spirit, and Starlight, we had big expectations for the Stealth. We can safely say that Aston Microphones has once again created a microphone at an outstanding price point that is very versatile. No matter which combination of the voice settings were used, or whether the microphone is active or passive, we were cable of achieving some really great sounds.

If you’re interested in learning more about the Aston Microphones Stealth or purchasing one for your studio, contact a Vintage King Audio Consultant via email or by phone at 866.644.0160.
Categories: Product Reviews & Videos
Posted By: Eric Allen