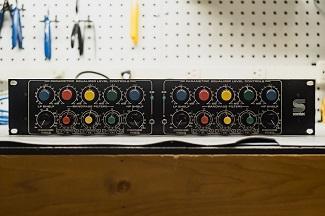 Things have been busy lately in the Vintage King Tech Shop and one of our first projects of 2019 has been this vintage Sontec MEP-250A. Technician Justin Weiss has been giving this beloved stereo 5-band equalizer some much needed care, both internally and externally.

To call the Sontec MEP-250A a "classic" is an understatement. It's actually a descendant of the first parametric equalizer (ITI ME-230), which was designed by Burgess Macneal and George Massenburg. After ITI went out of business, Burgess Macneal bought the rights to the equalizer and formed a new brand, Sontec.

At Sontec, Macneal would release the MEP-250A, which remains a popular piece of gear in studios around the world, especially mastering suites. This EQ can dial in frequencies with precision, or use a very wide "Q" for smooth transitions. It's very sweet and musical. In the time since the creation of MEP-250A, Sontec has gone onto release more equalizers including the MEP-250C and MEP-250EX.

If you’re looking to purchase a Sontec MEP-250A or any other vintage gear, contact a Vintage King Audio Consultant via email or by phone at 866.644.0160.