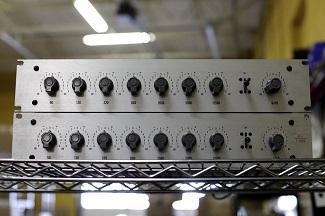 The letters EQ have become such a mainstay in the studio that we often don't think about where the abbreviation came from. It's essentially shorthand for "equalization" and "equalizer." It’s also helpful to think of them as symbols for "Enhancing Quality," as equalizers have certainly had a hand in improving audio over the years.

Throughout this Buyer's Guide, we will be approaching the subject of equalizers and learning more about their history and impact on the modern-day studio. Additionally, we will be covering the different types of equalizers, what makes them unique and the controls featured on most EQs.

A Brief History Of The Equalizer

While equalization originated in the early days of telephone transmission lines, this application was built-in to the system. It wasn’t until equalization was applied to audio circuits that it became a standalone tool. This came first in theater PA systems and then for audio post-production in sound films. Thank you, Hollywood!

As the crude systems for both producing and reproducing sound evolved, there was a constant need for the finished audio to be “shaped” to sound more natural. Enter the equalizer. In its various forms, equalizers allowed different parts of the frequency spectrum to be boosted or cut to create a sound more pleasing to the human ear. Indeed, during the early years of audio equalizers, the main goal was true equalization or finding a “natural balance,” as Westminster Records put it.

When audio became more sophisticated, the next stage was “high fidelity” and reproducing the signal with a high degree of accuracy. Because the components creating that signal all had their weak points (be it turntable rumble, tape hiss or high frequency radio noise) a simple EQ via filters or shelving was provided on amps and preamps to help maintain signal fidelity.

In a sense, truth was the goal. Everyone was reaching for that mythical "straight wire with gain" and basic Tone controls for Treble and Bass were found on most reproducers. Maybe even for Mids, if you had the dough for the fancy gear. As audio fidelity reached its peak with the arrival of transistors, the next stage was reducing distortion to inaudible levels. This was not a job for equalizers.

So what to do with all this equalizing power? The answer was to use it for aesthetic effect instead of simple realism. Groups like the Beatles realized that the recording studio itself was a musical instrument, and playing that instrument required lots of innovative tools, among the most important of which is the equalizer. And what was true half a century ago remains true today. Equalization is one of the most important tools in the toolbox of the audio engineer. It is not an overstatement to say that modern audio would be impossible without EQ.

Passive EQ designs were a creation of the 1950s and 1960s and included resistors, capacitors and inductors within their signal path. Think of the famous equalizers of the era from Pultec, Helios, Langevin and Cinema Engineering. From the 1970s onwards, almost all equalizers created were active designs. These EQs feature transformers and buffering amplifiers to make up for any signal loss in the filtering process.

Continue on below to discover more terminology that will be helpful if you are interested in purchasing an equalizer. There are numerous brands and kinds of equalizers, but all of them are based on some fundamental principles, no matter how they achieve their results. Whether tube or transistor, analog or digital, parametric or graphic, equalizers all share a purpose of enhancing quality.

Parametric equalizers exist mostly in rotary knob style, but there are some with faders/sliders too. They are named as such because of all all the parameters that can be controlled by the user.

While parametric equalizers typically have less bands than graphic equalizers, they offer more precise control for surgical EQing. On a parametric equalizer, the center frequency of the band is selectable along with its bandwidth (generally called “Q,” see more below), and the level of boost or cut of that selected frequency.

As opposed to most parametric equalizers, a graphic equalizer uses sliders for controlling EQ settings. This type of equalizer is called graphic because the position of these sliders provides a direct, “graphic” example of the overall waveform (such as the infamous “smiley face” EQ). You can literally see by looking which frequencies are higher or lower than the others. Like their rotary cousins, center frequency (and often bandwidth too) are fixed for each band.

These are among the most powerful equalizers available as some units allow the user to control upwards of 12 bands per channel. Varieties range from 10 sliders for frequency bands on a one-octave basis, 15 sliders for 2/3 octave increments, and 31 sliders for 1/3 octave difference between bands.

A cut-only style of equalizer, usually graphic but sometimes rotary style. Each slider (or pot) can attenuate a signal but not boost it, thus the controls top out at 0 dB. Notch filters are great for eliminating feedback, which often occurs at very specific frequencies. Thus, they find their home most often in permanent PA or monitor situations.

Understanding The Functions And Basic Controls Of Equalizers

This letter comes from the physics term “Quality factor,” which has been around almost as long as equalization itself. In the audio world, it indicates bandwidth. Every equalizer affects more than just the chosen center frequency on the slider or knob. The width of the spectrum that is affected is called the Q, with a High Q meaning a tight, narrow range of frequencies, and a Low Q meaning a broader range.

When the Q is adjustable, as in a parametric equalizer, there is a high degree of control available over the frequency spectrum. For most graphic equalizers, the bandwidth is either fixed at a certain range, or is proportional to the amount of boost/cut (i.e., the more extreme the boosting or cutting, the tighter the bandwidth), to allow for surgical removal or amplifying of specific frequencies. Typically, losses of at least 3 dB will be available within a given Q.

This is the band of frequencies that make it past the EQ filter. Or in other words, all the frequencies outside the Q of a given filter. In essence, every equalizer acts like a filter to affect certain frequencies and not affect others.

The cutoff frequency is the point where the passband and stopband meet.

The center frequency is the middle frequency between the boundary frequencies of the bandwidth, or Q. This is typically the point on the potentiometer that is chosen on a parametric equalizer, or the frequency given for a particular slider on a graphic equalizer.

A high pass filter attenuates, or lowers in amplitude, all frequencies below the Stopband, while also allowing all frequencies above it to pass. The HPF will not have any control over the frequencies it lets through. In the hi-fi days, this was often called a “Rumble Filter,” eliminating turntable noise from entering the amplifier and using up vital power.

The low pass filter is the opposite of a high pass. It allows all frequencies below the Stopband to pass, while attenuating all higher frequencies. The LPF also will not have any control over the frequencies it lets through. In the hi-fi days, this was often called a “Hiss Filter, eliminating tape hiss or white noise in radio reception from entering the amplifier stage.

A typical example is the Treble control on an amplifier. The High Shelf can either boost or cut frequencies, but only above the chosen frequency point. It thus differs from a High Pass, which does not affect those high frequencies, but simply lets them pass.

A typical example is the Bass control on an amplifier. The Low Shelf can either boost or cut frequencies, but only below the chosen frequency point. It thus differs from a Low Pass, which does not affect those low frequencies, but simply lets them pass.

What can be done with EQ? It’s all in the name. We can enhance quality, eliminate quirks, expose quavers and expand the Q. Select your tools wisely, and let your chosen equalizer help you on your quest for premium audio.

If you’re interested in learning more about equalizers or finding the one right for your studio, contact a Vintage King Audio Consultant via email or by phone at 866.644.0160.
Products in this Article
Categories: Buyer's Guides
Posted By: Leo Gillis