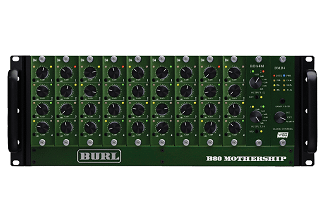 Burl Audio is known for their innovative Mothership, a modular AD/DA audio interface equipped with swappable “daughter cards.” Ahead of the upcoming 2019 NAMM Show, Burl has announced the release of two new daughter cards, the B4 Mic Pre and BDA4m.

While Burl has expertly created the Mothership to be adaptable to any studio's workflow, the true brilliance lies in the sound. Each daughter card offers an all-discrete, Class-A signal path with transformers and custom op-amps for analog-esque tone in the digital domain.

“We like to say The Mothership has Soul Power," said Will Kahn, Sales Manager of Burl Audio. "To us at Burl, it’s not only about looking at things in the scope of frequency response and specs, we believe that analog gear has soul. The analog circuitry of The Mothership has soul, and that's what we’re trying to bring into digital audio. Digital audio has always been flat and sterile and perfect and we’re redefining what that is.”

The B4 is a 4-channel MIC/LINE input ADC daughter card for the B80 and B16 Motherships. Featuring new BX6 input transformers, Burl’s NextGen BOPA14 OP-AMP, the same converters used in the BAD8 ADC card, the B4 offers everything you need to add a little soul power to your productions.

While the B4 helps simulate an analog input chain, the BDA4M does the same for your output chain. The BDA4M is a 4-channel mastering-grade DAC with superior fidelity and clarity. Equipped with the newly developed BOPA11 op-amp and the renowned BX5 output transformer, the BDA4M offers stunning detail and definition.

“Every component is chosen for superior sound quality,” continued Kahn. "It’s the best of both worlds. By backing off on the input and not hitting it too hard, you can get that pristine digital sound, but if you want more juice, saturation, and soul — hit it really hard. You’ll get a touch of something different which is the real difference.”

For years, engineers have taken digital projects and run them through analog tape machines to make them sound “less digital.” The B4 and BDA4M offer that same along flavor with no tape hiss, higher dynamic range, and more headroom. Welcome to the future of digital audio.

If you're interested in pre-ordering the Burl Audio B4 Mic Pre and BDA4m or learning more about the Mothership, please contact a Vintage King Audio Consultant via email or by phone at 888.653.1184.
Products in this Article
Categories: News and Events & Product News
Tags: Burl Audio
Posted By: Brad Pack