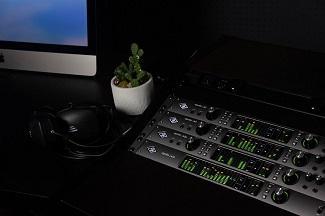 Over the course of the past few weeks, we've delved into some of the top selling items from last year in categories like microphones, monitors and outboard gear. We're starting off 2019 on the Vintage King blog with one more look back at the Best Selling Audio Interfaces of 2018.

With the studio scene constantly evolving, audio interfaces have enabled a wide range of music creators to make better recordings in all types of settings. Discover what interfaces topped our list (plus a few honorable mentions) and find out more about these innovative tools if you're looking to pick one up in 2019.

It's not all just about the power though. Apollo X interfaces also feature better conversion, surround sound monitoring and the Realtime Analog Classics Plus Plug-In Bundle. In terms of overall sales, the Apollo x8 Thunderbolt 3 Interface led the way as the best selling interface of 2018.

The Element 24 distills the best parts of the Symphony I/O Mk II, Ensemble Thunderbolt and Groove into an interface that's super easy to use. Imagine pristine mic pres that capture incredible detail with a gain range of 0-75dB and crystal clear conversion. That's what you get for $595 when you purchase the Element 24.

Universal Audio is back for their second appearance in the top five with the highly-mobile Arrow interface. For those who might see this as just another Apollo Twin (more on that later), you'll want to continue reading.

The Arrow is the most inexpensive gateway into the world of UAD-2 plug-ins and processing power yet. This 2x4 Thunderbolt 3-powered audio interface features one SHARC chip, 24-bit/192 kHz audio conversion and two Unison preamps that allow your Arrow to behave like the gear UA bases their plug-ins on.

When it comes to creating music on-the-go, the Arrow is fantastic. The interface is bus-powered, alleviating the need for extra power supplies. It's also slim enough that it will fit easily into any gig bag, briefcase or laptop carrier.

Like we said above, the Arrow and Apollo Twin are two different beasts altogether. For the best-selling Twin of the bunch, the Apollo Twin MkII DUO is a 2x6 Thunderbolt audio interface and features one more SHARC chip than the Arrow. This greatly increases your processing power and allows you to use more plug-ins during tracking.

No doubt about it, Focusrite Red interfaces are known for being extremely versatile. Right out of the box, you have dual Thunderbolt 2 connections, Pro Tools | HD compatibility and Dante network audio connectivity. No matter the workflow of your studio, you'll easily be able to install these interfaces.

The Focusrite Red 4Pre was the fifth Best Selling Interface Of 2018 and for good reason. With 58x64 I/O, the best quality converters from Focusrite yet and four digitally-controlled, 'Air' enabled, Red Evolution mic preamps, it doesn't get much better than this.

If you'd like to learn more about the Best Selling Audio Interfaces of 2018, contact a Vintage King Audio Consultant via email or by phone at 866.644.0160.
Products in this Article
Categories: News and Events
Posted By: Eric Allen