Discover The Best New Gear Of The 2019 NAMM Show 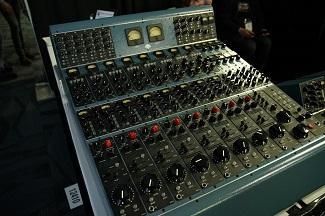 The dust has settled on the 2019 NAMM Show and it's been another banner year for product releases. There was so much new gear at NAMM that we had to gather together some of our favorites and highlight the best of the bunch on the Vintage King blog.

Want to learn more about some of the standout new releases from the convention center floor? Continue on below to watch our videos from NAMM and discover the latest and greatest in recording consoles, EQs/Dynamics, microphones, monitors, pedals, and synths.

New Consoles At The 2019 NAMM Show

In other exciting analog console news, Tree Audio offered up a look at their Roots 500 Series 8-Channel desk. The console features all tube and transformer input modules. along with two 500 slots above each input module so that you can fill it up with your favorite 500 Series modules.

The Slate Digital Raven MTZ lives up to the reputation of prior Raven models as a console gone virtual. This 43" multi-touch monitor allows you to control your favorite DAW via ten on-screen touch points. The MTZ also has a sleeker look than its predecessors as the monitor is only 1.5″ inches thick.

There was a lot of new outboard gear announced at the 2019 NAMM Show. The Pultec EQM-IS adds mastering features to the much celebrated EQP-1S 3U. For the EQM-IS, Pultec's BOOST/ATTEN controls provide 0.5dB steps for the initial ~50% of rotation and then increase step size as the rotation is increased from 50% - 100%

Dangerous Music has taken their extremely successful controller and summing mixer and added a plethora of bells and whistles for the new D-Box+. The unit still features eight channels of summing, but now has a quieter noise floor, five unique inputs and an app for remote control of all major functions.

New Microphones At The 2019 NAMM Show

Aston Microphones is back with a revolutionary new mic called the Stealth. This cardioid, end-fire microphone features a built-in Class A mic pre and four different voice settings. You can choose between two separate “vocal" settings, the “guitar” setting and the vibey “dark” setting.

Antelope Audio launched a new USB microphone at NAMM 2019 that follows suit with their Edge modeling microphones. The new Edge Go features a built-in preamp, A/D converter and the same vintage microphone plug-ins that made the original Edge mics such a huge success.

If you're looking for something new in the world of drum microphones, sE Electronics just may have the answer for you. Their brand new V Beat and V Kick microphones have minimal footprints in terms of size, but offer the punch and impact that you crave in your drum sounds.

Telefunken has introduced three new microphones as a part of their Alchemy series. The TF29, TF47 and TF51 each feature their own distinct voices, vintage microphone elements and extremely reliable and sturdy builds.

New Monitors At The 2019 NAMM Show

Focal Audio is continuing to build on the work they've done with their Trio6 monitor. The new Trio11 Be is an active near/midfield monitor with extreme neutrality, a precision of stereo image and ability to reproduce the tiniest details of sound.

ATC Loudspeakers is taking the SCM12 into the world of immersive mixing and surround sound with the SCM12i. This monitor is meant for use in small to medium size control rooms and features mounting points compatible with most popular brackets.

New Synths And Pedals At The 2019 NAMM Show

Chase Bliss Audio set the NAMM Show ablaze with talks of a new looping pedal and a stompbox pre with automation. The looper pedal is called Blooper and will allow you to greatly alter the loop prior to it leaving the pedal's output. Meanwhile, the automated mic pre is a collab with Benson Amps using technology from a pedal the brand released in 2018. While there was no timetable for release or price revealed for either pedal, the excitement was palpable.

In addition to releasing several new recording interfaces at NAMM, Arturia announced the Microfreak. This smaller digital synth is a collaboration with Mutable Instruments and blends together wavetable and digital oscillators with analog filters.

Spaceman Effects is back with a new pedal titled the Misson Control. This multi-effects unit does a wide variety of things, including an Autofader, Signal Router, Dynamic Effects Loop, Wet/Dry Blender, Y-splitter, Two-channel Mixer, Customizable Tremolo, Buffer, Interface for CV and Expression Control.

If you’re interested in learning more about any new gear from the 2019 NAMM Show, contact a Vintage King Audio Consultant via email or by phone at 866.644.0160.
Products in this Article
Categories: Product News
Posted By: Eric Allen