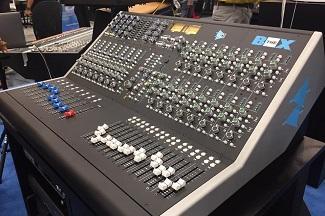 Today at the NAMM Show, API Audio announced they will be releasing a revised version of The Box in 2019.  It's been five years since the release of the original award-winning consol, which has been used in both professional and home recording facilities worldwide. The new version finds a whole host of updates and upgrades that will win over even more fans for the small format console.

The name of the game with the new Box console is flexibility. The console now offers eight inputs with mic preamp, line input and Hi Pass Filter, eight 500 Series slots, direct out on input channels and 16 summing channels (24 channels during mixing). There is also a 0dB bypass switch on each summing channel, something that was found on the original Box console and brought to the new 2448 and 1608-II consoles.

For those looking to bring home the sound of an API console, but are working on a smaller budget, the revised Box is the option for you. This console uses the same circuitry and components as every other API console and features a smaller footprint so it won't take up as much space in your studio.

In addition to The Box, API has also announced two new 500 Series modules in celebration of the company's 50th anniversary. These will be extremely limited edition, faithful reproductions of the classic 312 and 550A API modules.

The 312 module was used in API consoles of the 1970s and has become one of the most beloved mic pres in recording history. This is an exact reproduction of Saul Walker's original circuit board and features a AP2516 Input Transformer, and has a vintage style analog VU meter and a Peak LED indicator. There will only be 150 Anniversary Editions of the 312 released worldwide and they will be priced at $1,500.00.

The API 550A is another legendary design from Saul Walker, which features reciprocal equalization at 21 points in five steps of boost to a maximum of 12 dB of gain at each point. The module allows for you individually select high and low frequency ranges, while the band-pass filter can be inserted independently of the other settings. There will only be 50 units of this limited edition 550A made and each will be hand assembled and wired to the exact specs of Saul Walker's original circuit board. This 550A reproduction will retail at $2000.

If you’re interested in learning more about API Audio's The Box 2 console or the limited edition 312 and 550A 500 Series modules, contact a Vintage King Audio Consultant via email or by phone at 866.644.0160.
Products in this Article
Categories: News and Events & Product News
Tags: API Audio & API Audio Consoles
Posted By: Eric Allen