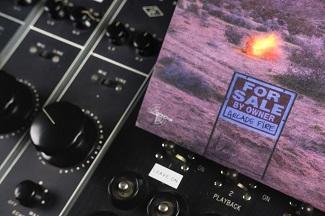 In the world of the recording studio, there may be no more recognizable console or mic pre than the Universal Audio 610. With its light green hue and large tactile knobs, Bill Putnam Sr.’s creation was known for adding warmth and harmonics to recordings while still keeping things sounding extremely musical.

The 610 mic pre and recording console’s resumes are beyond stacked. Both were used predominantly on some of the top records of the 1960s and 1970s, including Neil Young’s Harvest, The Beach Boys’ Pet Sounds, The Doors’ L.A. Woman and several Frank Sinatra recordings.

The UA 610-B mic pres in this console were built by Steve Firlotte of Inward Connections. They are exact reissues of the original modules with a more robust build. Only 25 of these modules were built. They have been used on projects by the Black Keys, Red Hot Chili Peppers, Dixie Chicks, Brian Wilson and more. This particular console was recently used in the recreation of the legendary Western Studio 3 for the film, Love & Mercy.

This console was most recently owned by Arcade Fire and used for the band’s latest album, Everything Now. Together with producer Steve Mackey (M.I.A./Florence and the Machine) and engineer Eric Heigle, Arcade Fire used the console for tracking the rhythm section, including drum machines and percussion.

Read Win Butler of Arcade Fire’s testimonial below to learn more about the band’s connection to the 610 console and its use during the sessions for the album in New Orleans:

"This console is absolute magic. The sort of equipment you can do anything with from a production standpoint. Most of the record was tracked through or passed through these channels at some point. The EQs are super musical, and you can be as extreme as you want without anything sounding harsh.”

In addition to talking to Win Butler about this custom Universal Audio 610 console, we also sat down with engineer Eric Heigle who worked on Everything Now with Arcade Fire. Read our interview below with Eric below and continue on afterward to see more photos of the console.

What was it like working on Everything Now with Arcade Fire?
Everything Now was a big project, and for the most part I was the only engineer. Arcade Fire refuses to repeat themselves, and so it makes each album unique from the rest. For “Everything Now” we built a studio inside a tiny carriage house in New Orleans. I believe it is 16’ x 9’ total. The physical space limitation made it difficult, but also created a cretain atmosphere. For the song “Chemistry”, there was over twenty people in that room during a party on halloween night, with twelve musicians playing live to tape. I don’t know any other band that would even attempt that.

Talk about using the Universal Audio 610 console on the sessions for Everything Now. How was the console used in the workflow of the record?
The UA 610 console has a lot to do with drum sounds on that record. I put everything except the kick and snare through the 610. I also used them on most of the lead vocals. In some cases, like in the case of the song “Infinite Content”, the entire two track mix was run through the 610 to add some harmonic embellishment. Sometimes bass or the low end of a drum machine would be run through it as well.

I’m sure you’ve used plug-in emulations of the 610 and now you’ve used the actual 610 modules. What was it like actually getting to work with a real 610 console?
Anytime you can reach out and touch something I think it’s a good thing. They also heat the room up which is sometimes good for sweating some takes out. The 610 modules also just have this really wide range in the preamps and EQs. There is an insane amount of headroom. Ain’t nothing like the real thing. If you’re interested in purchasing or learning more about this custom Universal Audio 610 console, contact a Vintage King Audio Consultant via email or by phone at 866.591.17532.