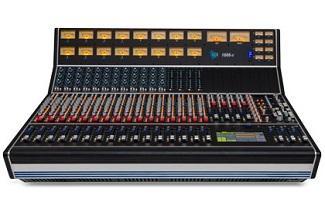 API Audio remains at the leading edge of small format analog console design with their newest offering – the 1608-II. Expanding on the architecture of their ever popular 1608 console, which helped revolutionize the analog project studio, API Audio has brought out its latest iteration, the Mk II.

The 1608-II is a fully analog board that merges a wealth of modern features with the rich history of API Audio console design in the classic 1604 model. All analog, all day long – this is a realm that API Audio knows like no other. For the 1608-II, API Audio has made some new upgrades, including four Stereo Returns, a global 0dB fader bypass and (optional) new cross-platform FinalTouchTM Automation System.

The API Audio 1608-II features a single audio path design, perfect for analog tracking, routing and monitoring, as well as:

Each channel of the API Audio 1608-II consists of one signal path for tracking or mixing. The core of each channel is the 548C Channel module, which provides for a variety of functions. The combination of the 16
channels, the 4 Stereo Returns, and the 8 Summing Bus masters provides 32 channels of audio for mixdown via the Program Bus.

The 548C Channel module provides everything you need to track and assign your audio signals. Employing a variation on the classic API 212L mic pre, the preamp section provides the essential tools of 48v phantom power,
polarity reversal, a -20dB pad, a peak output LED, and up to +55dB of gain.

The default signal to the 548C preamp section is the balanced, low-impedance Line Input, which can be hit with a -6dB pad before it flows to the classic API 550A equalizer. At this point the channel Insert Send/Return can be utilized, operating post-EQ and pre-fader. The signal can then be run through a High Pass Filter of -3dB at 50Hz (with a 6dB/octave slope). The signal can be Soloed or Muted as necessary, and even assigned to a Mute Group.

By default, the 548C feeds the Direct Outputs on the rear panel D-sub connector, with a post-fader, balanced, line-level signal (this can be calibrated with the Trim-pot). The audio signal can simultaneously be panned between the Left & Right Program Buses or the Odd & Even selections of the 8 Summing Buses (when engaged).

For expanded versatility, the 548C Channel Module provides for 8 Auxiliary Sends. The Auxes are 4 mono and 2 stereo sends, each with level control, an ON/off switch (illuminated), and a pan pot for the stereo sends. All of
the sends can be either pre- or post-fader. Aux Send 7/8 can also be routed directly to the Summing Buses 1-4.

The API Audio 1608-II provides a meter bridge with full analog VU metering, in a classic black/red scale on a yellow background for easy visibility. All Input channels have a medium-size VU meter, with the first 8 doubling as meters for the Summing Buses. Over the Master Section, the 8 Auxes & 4 Stereo Returns have their own set of small meters, while the Stereo Program Bus is displayed on the largest pair. All meters are illuminated.

The 840C multi-function routing module provides the controls for the channel VU meters. The source for the channel meters can be either the Direct Output, Line Input, or Mic Preamp. The VU CH button cycles through these three options, which are indicated by an LED. Selecting VU BUS instead will display the output of the Summing Buses.

The 265C module provides a choice between using the 8 small VU meters for the 4 Stereo Returns (the default setting), or the 8 Auxiliary Sends.

The 845C Monitor Control module selects the source for the Main Stereo Meters; the default is the stereo program master, while the Aux Sends and Solo Bus can also be displayed, as well as 6-Track playback.

The Meter Bridge is completed by LED indicators for the power supply voltages, as well as a built-in talkback microphone.

Master Of Your Own Domain

The API 1608-II has a comprehensive Master Section that allows you to control and process your signals for both tracking and mixing. This section houses the controls for:

Key to the processing and color of your sound are the four Stereo Returns located on the 265C module; these can take their input from either a D-sub Line Level (default), the eight internal Auxiliary Buses, or the eight 500 Series slots in the Master Section. These inputs can be summed to Mono, after which a Stereo Insert Return is also available. This is followed by a 100mm long-throw fader, with up to +10dB of gain. The post-fader output is mutable, and can be assigned to the Program Bus or to the Summing Buses 7 & 8.

To maximize the utility of the Stereo Returns, load the 500 Series modules of your choice for compression, limiting and tone shaping of every description. These modules can be used in pairs in conjunction with the
Stereo Returns, or as individually patchable processors. Complement the classic tone of the API mic pre/EQ with even more sonic sculpting.

The remainder of the 265C module contains the 8 Auxiliary Sends. These are situated in four pairs above their associated Stereo Returns (sends 1-2 are Stereo Return 1, etc). The Aux Sends have their own ON/off
switch, and provide for an External Input, Level control up to +6dB, Solo control, Talkback insertion (headphone feeds), VU meter routing, and a balanced, line-level output from the D-sub connector.

API Audio’s 168C Summing Bus Module contains the routing and control for all 8 buses, as well as an external input to the Program Bus. Each Summing Bus has its own on/off switch, Level pot (up to unity gain), Solo button, and assignments for the Left & Right Program Buses (these can be overridden by the rear panel ¼” TRS input switching jacks).

For the flexibility you’ll need to route and monitor for tracking and mixing, the 845C Control Room Monitor Control is the ultimate tool. Choose a Source to monitor from among the Program Bus, Aux Sends, or external 6-track playback for 5.1 monitoring. These are fed to the output control section, where it can be switched off, attenuated via the Dim Level pot, summed to Mono, and routed to the Main speakers, as well as two Alternative monitoring systems.

From there, the 268C Output Master takes over. The 268C’s six individual Monitor outs can be switched on/off, as well as allowing calibration of the trim pots before final send to the rear panel Control Room Output connectors.

The 1608-II can be ordered with an optional Final Touch™ moving-fader and switch automation system, or added later as an upgrade. Final Touch™ is a cross-platform system that provides moving faders and automated Mute or Insert for all Channels, Stereo Returns and the Program Master, as well as 2 automated Control Group Masters, and MIDI and SMPTE timecode synchronization. A built-in computer and touchscreen provide the interface, and no external computer is required.

Bringing Up The Rear

The rear panel of the 1608-II has all the connectivity you need to interface with your studio equipment:

It’s been a decade since API introduced the 1608 console. Since that time, it’s found a home in hundreds of studios around the world. Engineers and producers looking for an all-analog desk with a small footprint have made
the 1608 one of the most popular consoles around.

Now it’s time to update the functionality, while keeping the core API sound that users have come to know and love. One of the primary upgrades, in response to customer workflows, has been to change the 8 mono Echo Sends into four sets of Stereo Returns. Also available is an automation system that will interface with all other API consoles, making your sessions very portable.

With its upgraded functionality, slots for customizing your modules, and all the in-your-face tone of a classic API Audio console, now is the time to look into a new 1608-II with 16 channels,32 channels or 48 channels. Contact your Vintage King Audio Consultant to find out what the newest analog classic from API Audio can do for you and your studio.

If you’re interested in learning more about the API Audio 1608-II console, contact a Vintage King Audio Consultant via email or by phone at 866.644.0160.