The Basics Of Miking Drums For A Recording Session 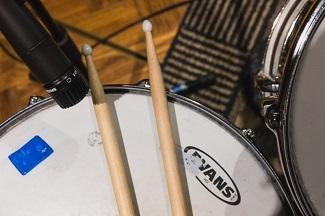 Let's face it. Drum recording can seem really overwhelming for anyone who is new to the concept. It’s not uncommon to have to manage placement, phase, and clipping for a dozen mics during a recording session. They key is to relax and take it one mic at a time.

Throughout this blog, we'll touch on some of the key elements of miking a drum set and how you can make sure you are doing the job right the first time. There are many different ways to accomplish recording a great drum track, but these are some of the time-tested basics standards that will keep clients happy.

The kick drum is a complicated instrument. It’s all about balance. There needs to be a balance between the lows and highs to provide enough “thump” and “snap” without being too muddy or harsh. Also, the kick drum needs to be a balance between the attack and sustain to provide enough “punch” and “power” to cut through the mix. To achieve this balance, many engineers chose to use two mics, one inside the kick and one outside.

Typically, dynamic mics are used for kick-in mics due to the high SPL.* The amount of attack varies depending on how close the mic is to the beater head. You can place the capsule of the mic just inside the sound hole, or bury it up by the beater. You can also control the tone of the mic by angling it. Point it towards the beater for more attack, and towards the shell for more resonance.

Kick-out mics tend to capture more room tone and ambiance. Many engineers chose to use large diaphragm condenser mics for their broad frequency, range and beefy low-end. Just be careful, too much SPL can damage the capsule.

Snare Drum
Snare drums have a similar problem with balance. Typically, engineers will mic the top and bottom of the snare separately. This lets you control the crack of the beater head, and the rattle of the snares underneath independently. The snare top mic is responsible for the majority of the sound, but the snare bottom mic adds definition.

Most engineers use a dynamic mic on snare-tops for their ability to handle high SPL. Condenser mics are also popular for their bright, balanced tone. Some engineers even choose to use both types by taping two mics together with the capsules touching.

Start with the mic a couple inches above the rim of the snare drum. Angle it about halfway between the center of the drum and the rim. Move the mic closer for a tighter tone with less bleed. Just be careful, as the mic gets closer the low-end increases. Move the mic further away for a more “open” sound. Angle the mic towards the center of the drum for more snap and attack, and towards the rim for more body and sustain.

Snare-bottom mics are used to bring out the brightness and clarity in a snare. Again, dynamic mics are typically preferred due to the high SPL, but a condenser mic with the pad on also works well.

Most engineers leave a little more distance (~3-5”) for added depth, but the same rules apply:

Just remember, if you use a snare-bottom mic you MUST invert the phase for that channel. Otherwise, the combined mics will sound thin, and all of the low-end will disappear. Most preamps and stock EQ plug-ins have phase flip (Ø) buttons.

Toms
Your biggest concern when miking the toms is minimizing bleed. Most engineers use dynamic mics because of the high SPL. Plus, they offer great rejection from the cymbals. Some engineers use large diaphragm condensers for a more “open” sound.

Many engineers use clip-on tom mics for the added convenience of not having to wrestle with the additional mic stands. Occasionally, engineers will use a different mic with More low-end presence for the floor tom.

Other than that, toms follow the same rules as the other drums:

Cymbals & Overheads
There are a lot of different ways to capture cymbals and drum overheads. You can chose to close-mic heavily-used cymbals like the hi-hat and ride or try to capture all of the cymbals evenly with overhead mics.

Many engineers will use the overhead mics to capture the sound of the whole kit, and use the close-mics for additional punch. Some engineers use a single mono mic, while others experiment with different stereo recording techniques. Many engineers prefer the balanced sound of the Glyn Johns’ Drum Miking Technique.

What’s important is that you move the mics around and experiment. Find what works best for your given situation.

Move the mics closer to the cymbals for more rejection, and further away for a more “open” sound.

Room Mics
Selecting and placing room mics is always the biggest variable in drum recording. It depends on the size and shape of the room, the genre of the song, the sound of the kit and the style of the drummer.

Most engineers use room mics to help make a drum recording sound more natural. Most of the time, these will be large or small diaphragm condenser mics, and occasionally ribbon mics.

Experiment with the placement until you find a spot that adds what you’re missing. Just remember, there’s no sense in putting a mic up if it doesn’t add anything to the sound of the mix.

Microphone Modeling Systems
While we've listed a lot of microphone options to consider when recording drums, there are a few we thought we would save before signing off. Several pro audio brands have created microphone modeling systems that allow users to record with an extremely clean sounding microphone and than run it through software that emulates a wide range of classic vintage microphones. Here's a list:

These microphones can be used in several different ways on drums to achieve the classic sounds of yesteryear as they give you exposure to a vast microphone locker.

If you have any questions about miking drums during recording or would like advice on what microphone you may need in your studio, please contact one of our Audio Consultants via email or by phone at 866.957.0822.